The Briton had not set a time when he came into the pits with the rear of his car in flames and will start from the back for the second race in succession. 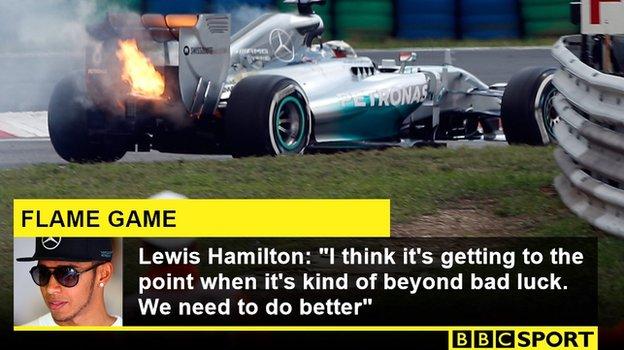 It is the sixth straight race in which Hamilton has hit trouble in qualifying.

Sebastian Vettel took second place after a much-improved performance in the Red Bull, with Williams' Valtteri Bottas in third.

"The engine just died," said Hamilton. "I thought I'm right next to the pit entry, so I'll roll back and at least get them to fix it. And then I looked in my mirrors and it was on fire."

At last weekend's German Grand Prix, Hamilton fought up from 20th on the grid to finish third behind Rosberg and Bottas following a brake failure in qualifying.

But overtaking is much more difficult at the tight and twisty Hungaroring than it is at Hockenheim, so Hamilton faces a long afternoon trying to make up ground.

He will start from the pit lane rather than the grid because Mercedes need to build up a new chassis and fit a new engine to it.

Rosberg, by contrast, can expect another comfortable race as long as he converts his pole position into a lead at the first corner.

"I would prefer to be out there battling with Lewis and that would give me the maximum adrenaline rush," said Rosberg of his team-mate's misfortune.

It is the sixth successive race in which Hamilton has suffered problems in qualifying of one kind or another and he has not started from pole position since the Spanish Grand Prix in early May.

In Monaco, he failed to get in his final lap when Rosberg went off the track ahead of him, causing yellow caution flags to be waved and in Canada and Austria, Hamilton made mistakes on his qualifying runs.

At Silverstone, he misjudged a drying track and was knocked down from first to sixth by other drivers when he failed to do a final lap, although he did go on to win the race.

Hamilton had been keen to reverse his qualifying form and take pole and a victory at a track on which he has won four times in seven races and go into the four-week summer break having cut his deficit to Rosberg.

After Hungary, there are eight races and a maximum of 225 points available, following the controversial decision to award double points at the final race of the season in Abu Dhabi.

But such is Mercedes' dominance that closing the gap on Rosberg will not be easy for Hamilton as if both cars finish they tend to be first and second, between which there is only seven points.

There was a dramatic beginning to the final top 10 shoot-out when rain started to fall just before the start of the session.

All the drivers went out on slick dry-weather tyres. Rosberg was first out and was caught out by the amount of water on the track and ran wide at the first corner but managed to rejoin the track.

McLaren's Kevin Magnussen, in the car right behind him, was not so lucky. The Dane locked up and smashed into the tyre barrier, forcing officials to stop the session for 10 minutes while repairs were made to the safety facilities.

When the session resumed, the leading positions changed consistently as the drivers swapped fastest times on slick tyres on the drying lap.

Rosberg ended up 0.486secs quicker than Vettel, who was 0.15secs ahead of Bottas.

Toro Rosso's Jean-Eric Vergne was eighth ahead of Force India's Nico Hulkenberg, with the unfortunate Magnussen 10th, although the Dane will start from the pit lane following a chassis and gearbox change.

Ferrari's Kimi Raikkonen was the victim of a terrible misjudgement by his team.

They decided to not go out for a second run in the first part of qualifying with either car.

But while Alonso progressed comfortably, Raikkonen was 0.7secs slower than his team-mate and he was pipped in the final seconds by the Ferrari-engined Marussia of Jules Bianchi. Raikkonen will start 17th.