Lewis Hamilton was "very, very shocked" to be asked to let team-mate Nico Rosberg by in the Hungarian Grand Prix.

The two drivers were on different strategies when Mercedes asked Hamilton to move over with just over 20 laps left.

Hamilton said: "If I let him past, then he could pull away and come back at me later. I was very, very shocked the team would ask me to do that."

Rosberg refused to discuss the incident publicly after the race.

"We have to discuss that internally and it would not make sense for me to speak about it now," he said. 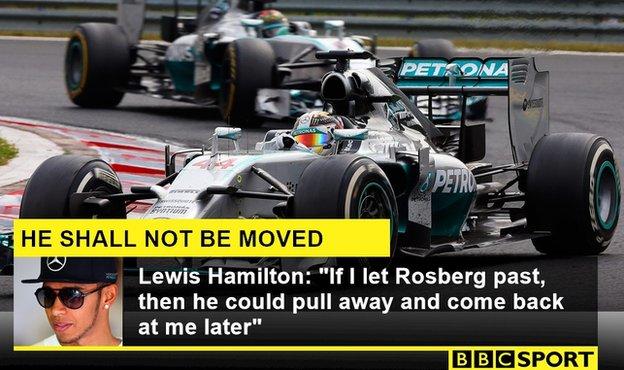 Hamilton ended up finishing third, one place ahead of Rosberg, after fending off the German on the final lap, following a sensational fightback that began from the pitlane, and included contact with the barrier on the first lap, as well as a brave pass around the outside of Jean-Eric Vergne on a wet track.

The result means Hamilton has reduced his deficit to his team-mate in the championship to 11 points.

Mercedes made the decision to ask Hamilton to move aside because Rosberg still had one pit stop to make, whereas Hamilton was racing to the end and they wanted to ensure Rosberg could score as many points as possible by getting back to the pits more quickly.

The Englishman was at the time in a battle with Ferrari's Fernando Alonso for second place behind Red Bull's Daniel Ricciardo.

Hamilton said of his decision to ignore team orders: "Obviously I am aware that I was in the same race as him. Just because he had one more stop than me doesn't mean I am not in same race.

"He didn't get close enough to overtake, I was not going to lift off and lose ground to Fernando or Daniel, so it was a bit strange.

"I don't know really if I was right or wrong. As far as I am aware I was racing him, and of course he had to do one more stop.

"If I had let him past, I am sure he would have finished ahead of me which would have been quite significant in the title race. But I am sure they will explain it to me."

Hamilton had fought up to battle for the lead after starting from the pitlane following a fire in qualifying.

The wet-dry race was punctuated by two safety car periods.

"This is damage limitation," said Hamilton, who also had to fight up from the back in Germany the week before after a brake failure in qualifying.

"I cannot explain the pain you feel when you have issues such as I have had in last couple of races.

"It is difficult to swallow, and to come back the next day and attack. You are pushing way beyond what you would do if you were on pole position. It feels satisfying coming through [and] to be ahead and still in the fight is still encouraging."

Rosberg said he had not asked the team to order Hamilton out of the way.

"It was the team who informed me he was going to let me past. I don't know what happened then; it's better to discuss internally.

"I am going to sit down with the team and of course Lewis will be there also and discuss how much we can learn from today."

Mercedes co-team boss Toto Wolff said: "We need to analyse how we ended up there and we need to again discuss the racing between the two. It is getting intense.

"Emotionally as a racer, on the track, I can absolutely understand why he would do it."