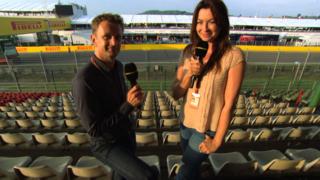 BBC Sport's Suzi Perry and Allan McNish discuss their highlights and stand-out drivers from the first half of the 2014 Formula 1 season.

Mercedes driver Nico Rosberg currently leads the drivers' championship, 11 points ahead of team-mate Lewis Hamilton - but it is Valtteri Bottas of Williams and Red Bull's Daniel Ricciardo that have really impressed McNish.

The second half of the Formula 1 season gets back underway in Belgium on 22 August - a race you can watch live on the BBC.