Singapore's spectacular street circuit will play host to the next round of the season-long battle between Mercedes team-mates Lewis Hamilton and Nico Rosberg.

The sport's first night race has fast become a favourite among drivers and fans alike with its lively atmosphere, tricky track layout and stunning backdrop.

Mercedes remain the team beat with a healthy lead in the constructors' championship after their seventh one-two of the season in Italy and will be looking for a repeat performance.

The latest in the Hamilton-Rosberg saga...

Hamilton and Rosberg arrived at the Italian Grand Prix with all eyes on them after they collided at Spa a fortnight earlier.

But the pair were allowed to continue to race each other, a decision which was relished at Monza.

Hamilton started on pole following his blistering performance in both practice and qualifying but a technical glitch on the grid saw him passed by Rosberg and drop down to fourth.

The Briton fought back to second and then began putting pressure on his team-mate, with Rosberg eventually cracking.

Hamilton went on to take his sixth win of the season and closed the gap to 22 points with six races to go.

Reasons to watch the Singapore GP

At almost two hours, the race is comfortably the longest on the calendar and with the added challenge of bright floodlights and unusual timetable that plays havoc with the body-clock, the Singapore GP has all the ingredients of a classic.

All eyes will be on Rosberg to see how he responds to the psychological blow Hamilton inflicted on him in Italy.

Red Bull's Daniel Ricciardo will aim to gatecrash the party, though. The Australian impressed again in Monza, with BBC F1 analyst David Coulthard tipping him as a "future multiple champion" as he went from 12th to fifth in 25 laps.

The spectacle of Singapore

The Singapore Grand Prix takes place on the Marina Bay Street Circuit and was the inaugural F1 night race.

Lit by thousands of powerful floodlights, the track is glamorous but its mix of high-speed straights and bumpy slow corners makes it a real challenge for the drivers as they weave their way between the barriers.

The circuit has hosted a grand prix every season since 2008, when Renault's Fernando Alonso won his first race of the year.

He also won it in 2010, to sandwich Hamilton's victory, before Sebastian Vettel dominated with three wins in the last three years.

What the drivers have been doing... 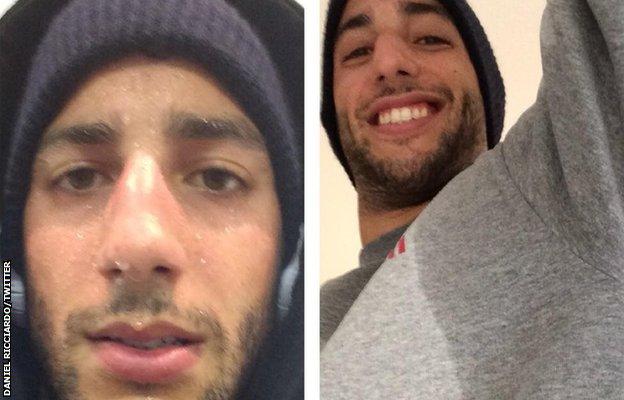 Red Bull driver Daniel Ricciardo proudly showed off his sweat patches as he prepared himself for the heat and humidity of Singapore. "Been preppin' for the Singapore heat this week, killer sweat patches," he tweeted.

Lewis Hamilton took his mind off the title battle by taking in Arsenal's game against Manchester City on Saturday, 13 September. He tweeted: "Went to my first game EVER [of] my team since Ian Wright days. Great day."

Ferrari driver Fernando Alonso, meanwhile, appeared to take a trip out into the desert to race a radio controlled car.

Formula 1 broke new ground in 2008 when Singapore hosted the sport's first ever night race - and it turned out to be an event no one would ever forget.

Ferrari's Felipe Massa had looked set to dominate, leading from pole position and pulling away from title rival Hamilton early on.

But during his first pit stop, he was given the green light to leave before the team had removed the refuelling hose.

The Brazilian pulled away, knocking over a mechanic and dragging the hose down the pit-lane. He stopped at the exit and was forced to wait while his mechanics ran after him to remove it.

His afternoon was made worse when he was given a drive-through penalty for leaving the pit dangerously and ultimately finished 13th.

Hamilton finished third to extend his lead in the world championship, behind race winner Alonso of Renault and Williams' Rosberg.

Alonso's chances of victory had looked bleak when he qualified 15th but the race opened up for him when an early safety-car period tallied perfectly with the team's strategy.

But it later transpired that his Renault team had fixed the race, with team-mate Nelson Piquet Jr crashing deliberately, under team orders, to bring out the safety car.

Team boss Flavio Briatore was banned from the sport indefinitely, while director of engineering Pat Symonds was given a five-year ban. Both punishments, however, were overturned on appeal.