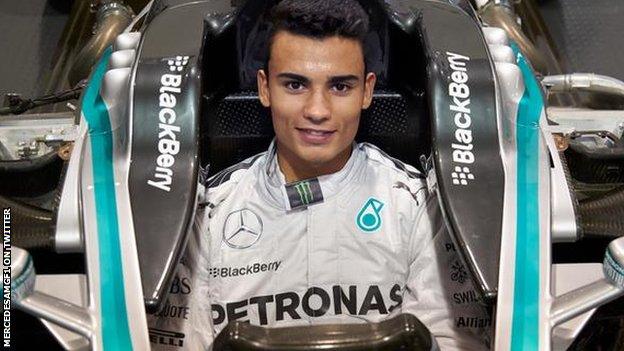 The 19-year-old, who has covered 12,000km in the team's simulator this year, had a first Formula 1 test last week at Portugal's Portimao track.

The team were "impressed with his progress and feedback".

"Pascal has a bright future ahead of him and we are excited to have him on board for the intense conclusion to the F1 season," team boss Toto Wolff said.

Mercedes have dominated F1 this season and their drivers Nico Rosberg and Lewis Hamilton are effectively disputing a private fight for the title, although Red Bull's Daniel Ricciardo is not completely out of touch yet.

As reserve driver, Wehrlein, who is 20 next month, would likely step in if Hamilton or Rosberg were unable to race.

"Pascal has worked hard behind the scenes this year in our simulator, playing a very important role in our pre-race preparations," Wolff said.

"He took an important step last week when he drove an F1 car for the first time and we were pleased to see him deliver a composed and impressive test, in line with our expectations."

Wehrlein took his maiden win in the DTM German Touring Car championship at the Lausitzring on Sunday and was runner-up in the Formula Three Euroseries in 2012.