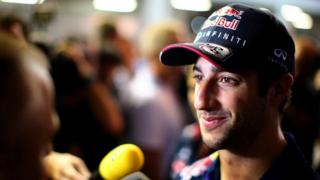 Red Bull's Daniel Ricciardo says the ban on driving advice over team radio could be a "shock to the system" for Mercedes drivers Lewis Hamilton and Nico Rosberg.

Governing body the FIA has issued guidelines over what teams can and cannot tell drivers to help enforce a rule that they "drive the car unaided".

Ricciardo's team-mate Sebastian Vettel thought that the ban could make managing the cars' complex systems "rather interesting," though Ferrari's Fernando Alonso said the changes would have no effect on the race itself.

EFL: Norwich lead and heading top after Boro have penalty ruled out for double touch; Rooney's Derby behind