Lewis Hamilton took the lead in the World Championship for the first time since May with victory in the Singapore Grand Prix.

Hamilton briefly lost the lead to Red Bull's Sebastian Vettel at his final pit stop but soon swept past to take his seventh win.

Vettel took second after a battle with Daniel Ricciardo and Ferrari's Fernando Alonso.

Rosberg had been in trouble with his car from the moment he tried to leave the garage before the race.

He had gear selection issues, which were not helped by changing his steering wheel. He had to start from the pits because he could not get off the dummy grid at the start of the formation lap. But the car was running without hybrid power and he could not even pass Marcus Ericsson's Caterham.

The team intended to try to reset the car at his first pit stop but Rosberg could not engage a gear and was forced to retire.

"The steering wheel did not work and then the whole car wasn't working. We need to find out what the problem was because again we have a reliability problem," Rosberg said.

"We've had a few this year and that's our weakness. We need to get to the bottom of it and make the car 100% reliable. 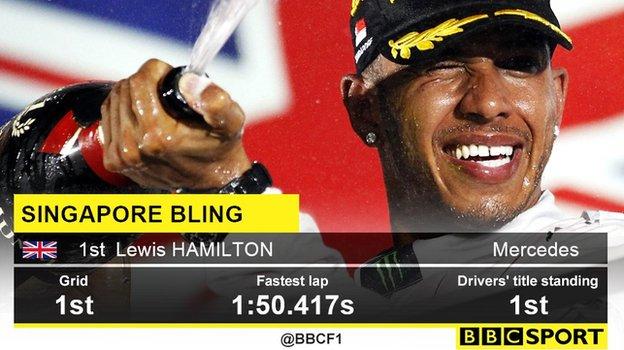 "It is tough not even leaving the grid. I was hoping the team could fix it after the race had started because it was going on and off."

The safety car was introduced on lap 31 following a collision between Force India's Sergio Perez and Sauber's Adrian Sutil that led to the Mexican's front wing detaching and leaving debris strewn across the track.

At that point, Hamilton was leading Alonso by nearly six seconds, with Vettel and Ricciardo third and fourth.

Hamilton had led from the start and Mercedes chose to leave him out on his super-soft tyres, which he had fitted only five laps beforehand. Alonso dropped to fourth as Ferrari called him in to fit the soft tyres that the Red Bulls had fitted shortly before.

The race was restarted on lap 38 and Hamilton built a 25-second lead before he was called in for his final stop on lap 52.

He rejoined just ahead of Ricciardo and about three seconds behind Vettel, but such was his pace advantage on fresh tyres that he swept past the German within a lap-and-a-half down towards Turn Seven.

Alonso had made a great start from fifth to get alongside both Red Bulls into Turn One. The Spaniard ran wide into the run-off area and emerged in second place. He handed that position back to Vettel on the basis he had gained an advantage from going off the track, and the stewards agreed he did not need to do the same with Ricciardo.

Alonso trailed Vettel through the first stops but took second from the German by making an earlier second pit stop, only to drop to fourth as a result of the safety car.

On tyres that were four laps younger than Ricciardo's, Alonso piled the pressure on the Australian, who himself began to close on Vettel, who had stopped two laps before his team-mate.

In the last couple of laps the three cars were covered by less than a second but neither Ricciardo nor Alonso could make any progress and Vettel held on for second, with Ricciardo in the final podium position.

Behind Alonso, Williams's Felipe Massa made his tyres last to the end from his final pit stop on lap 22 to take fifth.

But in a frantic last few laps, his team-mate Valtteri Bottas could not do the same and dropped from sixth to 11th as he lost all grip.

Force India's Nico Hulkenberg was ninth from McLaren's Kevin Magnussen, who was battling cramps and dehydration because he could not drink from an overheated bottle in the demanding conditions.