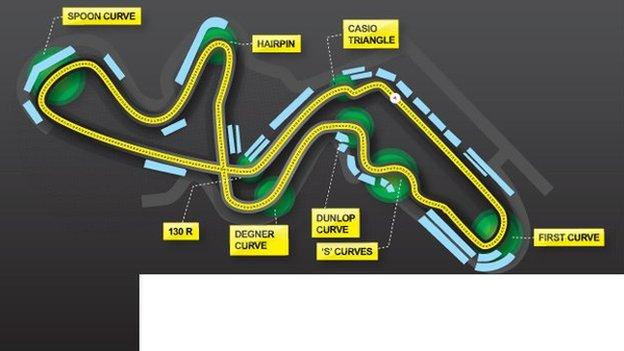 Lewis Hamilton has an opportunity to stamp his authority on the world title fight with Mercedes team-mate Nico Rosberg for the first time this season when the pair contest the Japanese Grand Prix at Suzuka.

Hamilton snatched the championship lead in Singapore, capitalising on his team-mate's mechanical failure to take victory under the floodlights and turn a 22-point deficit into a three-point lead.

Can the German respond at the fast and technical Suzuka? Or will Hamilton stretch his legs and build on his advantage?

Hamilton has never won the Japanese Grand Prix when it has been held at Suzuka and that's something he is keen to rectify.

"It's the one track I want to win at," he told BBC Sport. "I have a serious target there."

Advantage Hamilton in the Mercedes battle

There was a sense after the Italian Grand Prix, when Rosberg made a mistake to gift Hamilton the win, that the momentum had swung in the Briton's favour. After Singapore, that momentum had turned into a championship lead.

Having spent much of the year chasing Rosberg, thanks largely to three mechanical failures, Hamilton led from lights to flag in Singapore as it was the German's turn to suffer bad luck.

It was a dominant performance from Hamilton, who dealt well with the safety car period wiping out his lead, and completed what has been a rare trouble-free weekend for the 2008 world champion.

The gap may only be three points, but Hamilton, with seven wins to Rosberg's four this year, is in the ascendency at a crucial point with five races remaining.

This is only the second time this season Hamilton finds himself in the lead of the championship. With two intense title battles under his belt, one of which he won in 2008, he will be determined to use that experience to hang on to it.

While Singapore has the glitz, the glamour and the honour of being Formula 1's first ever night race, Japan's Suzuka, located pretty much in the middle of nowhere, needs no such gimmicks.

The iconic circuit, which crosses over itself in a figure-of-eight design, is a good old-fashioned racing challenge which excites both drivers and engineers.

The sequence of fast corners, including the 200mph 130R turn, is a favourite among drivers and provides a tough test for both tyres and aerodynamic performance.

A car-themed amusement park, in which a huge Ferris wheel looms over the track, is at the centre of Suzuka, a venue which attracts some of the most fanatical F1 fans in the world.

How the drivers have been preparing...

Tensions were high as bitter rivals Ayrton Senna and Alain Prost arrived at Suzuka for the title-deciding 1990 Japanese Grand Prix.

A year before, the pair had collided at the final chicane and while Prost retired and Senna continued, the Brazilian was ultimately disqualified and the Frenchman won the title.

This time, Senna had the lead in the championship and gave himself the advantage by taking pole position.

However, the three-time champion was unhappy pole was not on the racing line, and thus the cleaner side of the track.

Together with Gerhard Berger, Senna went to the stewards to ask for the grid slot to be moved and although they initially agreed, they were overruled and pole stayed where it was.

Prost got the better start, but Senna dipped into the Frenchman's slipstream then pulled out and got his nose alongside Prost heading to the fast first corner.

The two collided, sliding off into the gravel and out of the race. As a result, Senna won the second of his three World Championships.

Nelson Piquet went on to win the race, with his Benetton team-mate Roberto Moreno second and Japan's Aguri Suzuki completing the podium, to the delight of the home support.

The Japanese Grand Prix is live on BBC TV, radio and online.