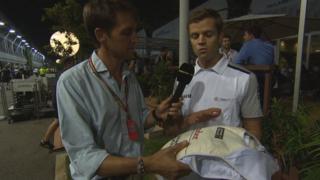 How to survive the heat in Singapore

Cockpit temperatures reached up to 55 degrees Celsius during the race, and drivers have to stay cool and well hydrated in order to stay focussed on the race.

Jenson Button retired on lap 53 having made his way up to seventh, while team-mate Kevin Magnussen finished tenth despite complaining that his drinking water had become so hot it was burning his mouth.