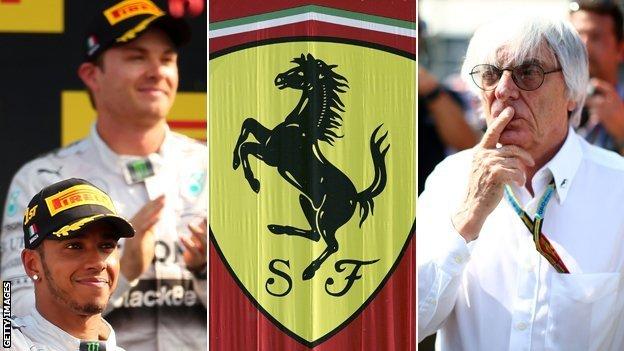 BBC F1 chief analyst Eddie Jordan answers your questions ahead of the final five races of a gripping season.

What are the main strengths of Lewis Hamilton and Nico Rosberg in the fight for the championship?

"They are different characters and they have known each other a long time. They each know that the other is very resilient. But it's generally recognised that Lewis has a fraction more speed, particularly in qualifying, even if there have been a couple of surprises this year. And it's generally acknowledged that Nico is on a more even keel. It's an intriguing fight, especially with only three points separating them with five races to go." 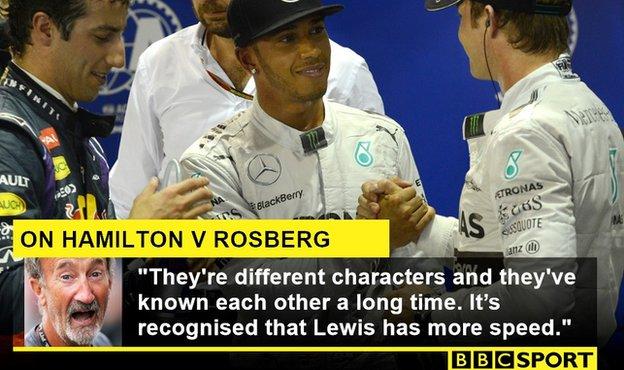 ‬‬‪What's wrong at Ferrari and how do they fix it?

"There has been something wrong at Ferrari for a while. Replacing Stefano Domenicali as team principal has not changed it. Marco Mattiacci has only been there a few months but there were promises we would see signs of improvement and we haven't yet.

"There have been flashes of speed but Ferrari need more than flashes. They need a consistent programme, where there is momentum, passion, spirit. I don't see any of that. I don't see any real belief they are going to be winners.

"In the past, there has always been a sparkle of brilliance about Ferrari every now and again, even if they weren't winning championships.

"They have a driver whose capabilities are beyond question. This is the man who overtook Michael Schumacher around the outside of 130R in Japan in 2005. It was an overtaking move I will remember for the rest of my life, because it symbolised the end of the total reign of the king and the passing of the baton from one generation to the next.

"How can Ferrari not have taken Alonso to the title? They threw the championship away for him in Abu Dhabi four years ago and since then the cars have been sub-par. It's not good enough."

Can Daniel Ricciardo clinch the title with five races to go plus double points at stake in Abu Dhabi? ‬‬

"No, but that's not because of ability. He is the surprise package of the year. If you'd said to me at the beginning of the year that this guy would win three races and Vettel would win none, I would have said you were dreaming. He has been a revelation. He's one of the best things to happen to F1 in a very long time." 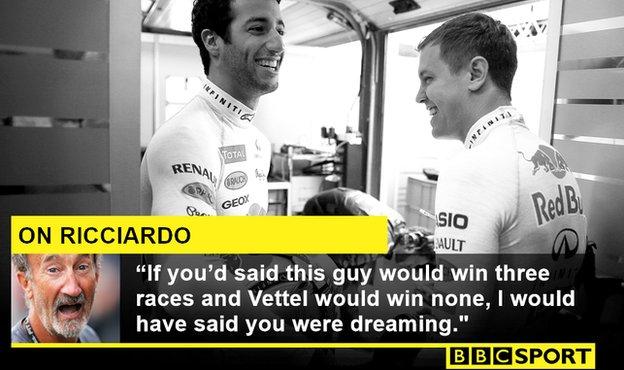 Who would you like to see succeed Bernie Ecclestone as F1 promoter? Who do you think is most likely to succeed him?‬‬‬

"It's a difficult call, because Bernie is irreplaceable. The amount of passion, time, and thought he puts into it is incredible. You could say he is meddling more now than before - too much, perhaps - but overall I'd rather be with Bernie than anyone else because you know when he says something he delivers, even if he slings in a few curve balls.

"It probably needs to be a younger person. They won't have equity in it, so you need someone who is no older than their fifties, has a clear understanding of the current world financial market, who is commercially minded and who has an understanding of racing, maybe even someone who has raced themselves, but not at the highest level because I don't think people who have competed at the very highest level make good managers.

"You only have to look at the Ryder Cup as an example of that. Paul McGinley hasn't had anything like the career of Tom Watson, but he was dedicated and committed and passionate about what he needed to do to win. It needs to be someone who has a grasp of all the aspects, and can not only preserve the money that is already there but hopefully increase it."

Could Williams surprise Mercedes in Japan this weekend?

"Yes, I think they could. The gap to Mercedes is slowly reducing. There are now more teams who can occasionally take it to them. Mercedes must never fall into a complacency trap, nor the importance of getting the best out of the drivers. And I have seen a few little things that suggest Mercedes need to keep the pressure on themselves." 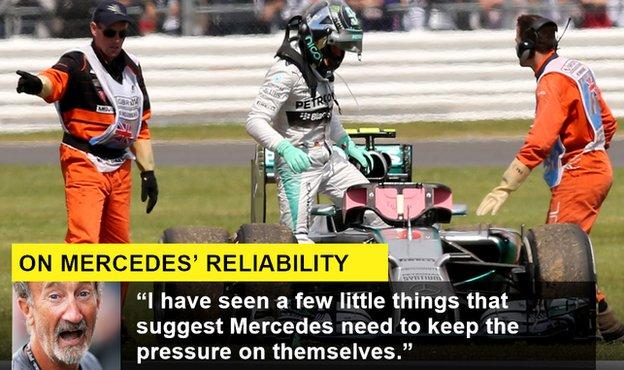 If money was no object, what team would you buy from the current bottom six?

"Well, as we speak, Force India are not in the bottom six - they are in fifth ahead of McLaren. But I would go with them. They still have a lot of good things in that team. From a sponsorship point of view, they need more stability. Vijay Mallya has done a remarkable job of employing the right people and doing what they have on the money available but it's always difficult when you're not there every day and it's not the main focus of your business."

Which team will Fernando Alonso be racing for in 2015?

"We know Alonso has talked to a number of teams, but are any of them going to be much better than where he is now? My guess is no. However, that did not stop Hamilton leaving McLaren when they looked like being a championship winner and going to what was then a lesser team in Mercedes.

"There is no question Alonso can build a team into a championship winner - he is that good. Just like I think Lewis has helped the whole Mercedes team up their game. 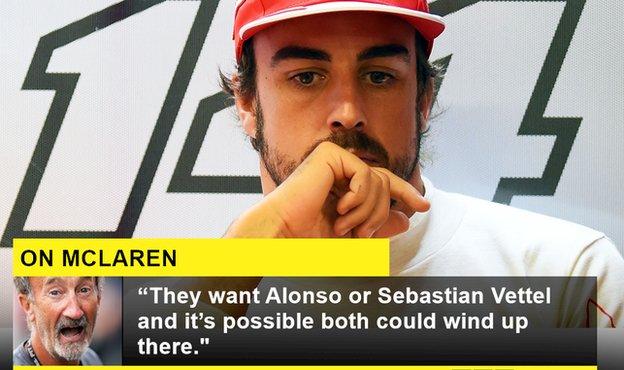 "The only place he could go - and I still think there's a possibility of it happening - is McLaren. They do want a top driver next year and for whatever reason the current management don't seem to think Jenson Button is that driver, even though he is a world champion and knows the Honda management well.

"Honda and McLaren want to hit the ground running. They want Alonso or Sebastian Vettel and it's possible both could wind up there. There are moves happening as we speak and possible scenarios that by the end of October there could be a change of management and of drivers in that team."

Can EJ explain this [below picture]?

"My band The Robbers we're asked to play by Paul McGinley at The Ryder Cup . It became very frenzied and 'Euro Eddie' was part of the celebrations. Triumphant weekend, sensational atmosphere."

Should F1 do more to help the smaller teams, and what?‬‬‬

"Yes. At the moment, the team that finishes 11th in the championship gets no TV money. That's clear in the Concorde Agreement. But they still have to get their team to all the races. That makes it hard for them, and they still have to go out and get some sponsors. I don't believe there are no sponsors out there. But one of the difficulties recently is that there has been a trend that a lot of companies who come to F1 with teams end up sponsoring the sport as whole. I would like to see an agreement whereby if a team brings in a sponsor, the commercial rights holder should not try to lure them for five years."

Who do you think is the best overall driver in F1?

"Difficult one. On any given day, Hamilton, Alonso, even Rosberg. And on their coat tails is Ricciardo. Vettel? He would have been there but I am really confused by him this year. Can it possibly be that the car does not suit him? I can't believe it. Or is it that, as Alonso always stated, 'give him a normal car and we'll see how good he is'? Well, this car is normal. The jury is out for me on Sebastian at the moment. Anyone who can win four world titles is very special but this has been a lacklustre year for him." 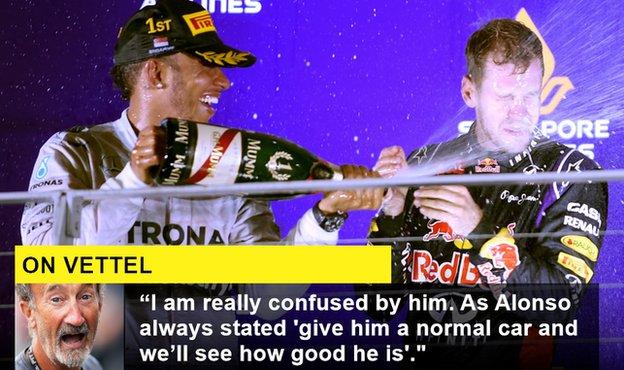 Do you think Mercedes will retain Hamilton beyond his current contract?‬‬‬

"My feeling is yes. He's very popular there. And I think he'll stay as long as Niki Lauda is there."

What is your expectation of McLaren-Honda?

"Mmm. They are both companies with big reputations, but the jury is still out. I don't at the moment see a lot of evidence that they are going to be electric. I think Honda will be very strong, but on the other hand they only won one race with their works programme in the last decade - Jordan won more races for Honda than BAR or Honda did. If I was a driver they were trying to sign, I would want to see a lot of evidence it was going to be good before I committed."