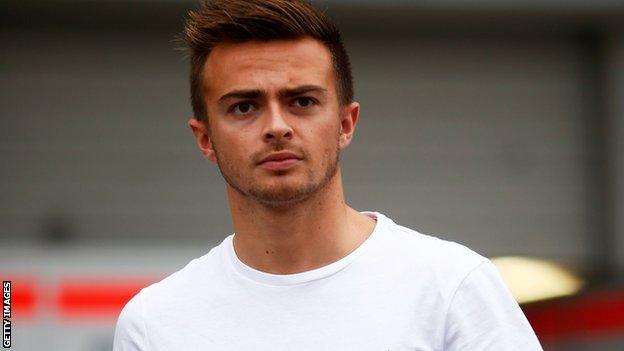 Will Stevens has joined Marussia as a reserve driver and will take part in some first practice sessions for the remainder of the 2014 Formula 1 season.

The team had originally planned to run Stevens in first practice in Japan on Friday in place of Max Chilton but a late hitch meant that plan had to be abandoned.

But the team said Stevens would "take part in a number of free practice sessions for the remainder of the season".

The 23-year-old Briton becomes a reserve alongside American Alexander Rossi.

Stevens is racing in the Formula Renault 3.5 series this season, and drove in a test for rivals Caterham at Silverstone in July but has since split with the team.

The team had told Chilton ahead of the Japanese race that he would be missing first practice.

But Marussia were not able to complete the required paperwork in time, blaming industrial action in Germany for preventing them getting the paperwork to F1's contract recognition board, an organisation that oversees deals in the event of disputes between teams and drivers.

Stevens said: "We tried to get all the paperwork done to get me to run but it didn't go to plan. The plan is to get me in the car as soon as possible.

"Hopefully we can be in with a shout of a race seat next year, that's certainly what we're setting out to do."

Marussia team boss John Booth said: "We have admired Will's ability to learn quickly and compete in the thick of the action, so we are very pleased to add him to our roster of official reserve drivers, which is now looking very strong indeed.

"It is great to be able to take such promising talents as Will and Alexander under our wing and help them progress to the next level.

"We look forward to seeing Will perform in the MR03, when I am sure he will demonstrate some further signs of his obvious potential."