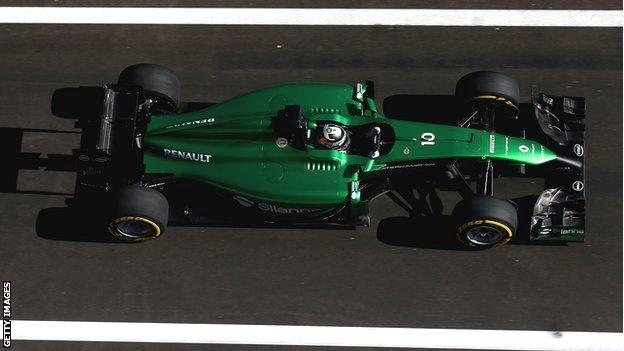 The bosses of Caterham F1 have formally agreed to hand over the running of the team to administrators.

Control of the Oxfordshire site where the cars are made has been given to London firm Smith & Williamson.

Caterham say they took the decision "in the higher interest of allowing the team to continue operating and preparing for the next events".

But the chief administrator says he fears the team will not compete at the US Grand Prix in Austin on 2 November.

Finnbarr O'Connell of Smith & Williamson said: "I really need them to come to me with an acceptable figure [to offer their creditors] so they can gain access again to [the factory at] Leafield.

"It's very important to us they race, but for the creditors of Caterham Sports Ltd, it's not up to them to fund racing."

The administrators had already been working on behalf of the creditors of Caterham Sports Ltd, a company which makes and supplies cars to 1MRT, the entity which owns the licence to race in Formula 1.

They have now also been placed in charge of 1MRT, with a long-term view to finding a buyer for the troubled constructor.

"I think that is the case," he said. "I did ask 1MRT on Thursday if they would be willing to [hand over management responsibilities] in order for me to try and find a new financial backer for the team, so this is their reaction to my request."

O'Connell added that re-opening the team's factory depended on finding a financial backer.

"Our objective is to get this team racing on a proper financial standing," he said. "Hopefully if a funder comes through, this team can run again.

"I have spoken to people who are interested in taking over the Leafield factory, and the staff being employed there.

"It's early days, but there is a major hope that all of that can happen."

O'Connell said he was still waiting to hear from former Caterham boss Colin Kolles, who said on Thursday he had done everything he could to resolve the situation.