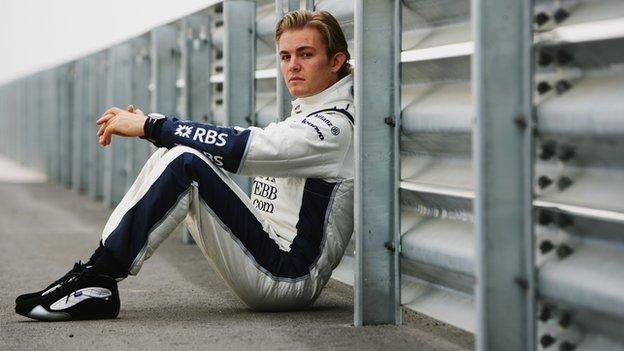 You could say that Nico Rosberg was born into Formula 1.

The German, 29, grew up in Monaco and got behind the wheel of a car for the first time aged four, with an adult controlling the pedals.

That adult was his father Keke Rosberg, a successful former racing driver who won five grands prix and the 1982 Formula 1 World Championship.

Starting in karting, where he spent the season with Lewis Hamilton as his team-mate in 2000, Rosberg made his way through the racing ranks, backed by his father.

After winning the 2005 GP2 series, the feeder championship to F1, Rosberg got his break with Williams the following year.

Eight seasons later, once again paired with Hamilton at Mercedes, the German found himself with his first real shot of winning the Formula 1 world title.

But at the final race of the season in Abu Dhabi, Rosberg failed to match his father's achievement as Hamilton took the spoils.

Born in Wiesbaden, Germany, just four days after his father won the 1985 Detroit Grand Prix, Rosberg moved to Monaco with his family and was soon bitten by the racing bug.

His earliest Formula 1 memory is dozing on the deck of a yacht in the harbour in Monaco on a Sunday morning when he was woken by the sound of McLaren's Ayrton Senna racing past through the tunnel.

After his first experience in a car, aged four on a trip to Ibiza, it wasn't until six years later, when he saw his father race in the German Touring Car Masters series that he decided he wanted to become a Formula 1 driver.

And so began the pursuit of his dream, one which was helped by his father's profile - but that's not something Rosberg is ashamed of. "Thanks to my father and my name, it made it a little bit easier for me," he said.

After several years in karting, Rosberg, who races under the German flag of his mother rather than the Finnish colours of his father, made his first real mark with victory in the Formula BMW single-seater series, scoring nine wins in 20 races to take the title.

Two years later, he claimed fourth in the Formula 3 Euro Series before being faced with a major decision to make when Imperial College in London offered him a place on their aeronautical engineering course, which would require him to quit racing.

Aeronautics - along with racing and tennis - was one of his big passions growing up - but he ultimately chose to gamble on the dream, accepting a deal with the ART Grand Prix team in GP2 and going on to win the title.

All new Williams drivers have to take an engineering aptitude test. When Nico Rosberg turned up for his, he walked away with the highest score in the team's history.

It should have been of no real surprise for a man who can also speak five languages - German, French, English, Italian and Spanish - fluently.

On being given his chance at Williams in 2006, he scored points on debut at the Bahrain Grand Prix after fighting his way back through the field in a midfield-performing car to secure seventh.

Rosberg, who was given the nickname "Britney" - as in pop star Spears - for his young, blond, good-looking appearance by then team-mate Mark Webber, also netted the fastest lap of the race - becoming the youngest driver ever to do so.

Two years later, Rosberg scored his first F1 podium with a third place, sharing the rostrum with Hamilton whom he had raced with in karting, and his consistency the following season helped him secure a deal with Mercedes from 2010.

This season, after eight years and three wins in the sport, Rosberg was given a car which was capable of winning the World Championship.

And with one race to go, Rosberg was closer than he had ever been, just 17 points behind Hamilton with a maximum of 50 remaining at the season finale in Abu Dhabi.

But he lost the lead to Hamilton at the start and then suffered problems with his hybrid system. Hamilton went on to win the race and the title but Rosberg remained magnanimous in defeat.

Aside from speaking five languages and his ability to drive a racing car very fast, Rosberg's a pretty handy tennis player while his party trick is to juggle three balls while pedalling a unicycle.

You'll also often see the German doing keepy-uppys with his trainer before each session during a grand prix race weekend.

And on his YouTube channel, you'll find videos of him walking on a wire in Ibiza, doing memory games while doing press-ups and racing a shopping trolley down a hill in Monaco.

He admits to a love of karaoke, chess, backgammon - of which he claims to be the best player in the paddock, triathlon and football.

And earlier this year, the German had the best seven days of his life, marrying his long-term girlfriend Vivian Sibold in the same week that Germany won the World Cup and he signed a new Mercedes contract.