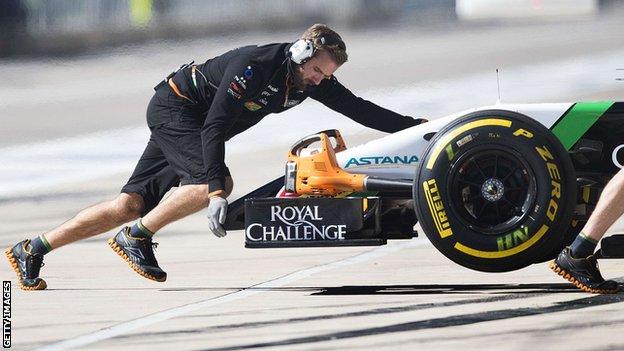 Force India say they are considering boycotting the US Grand Prix in protest at a failure to address what they see as a financial crisis in Formula 1.

The smaller teams are struggling to make ends meet and believe the split of revenues, which is skewed in favour of the top teams, is to blame.

The Marussia and Caterham teams have recently gone into administration.

Force India said they, Lotus and Sauber could make a stand by skipping the race in Austin but Lotus dismissed the talk.

But asked whether the boycott threat was real, Lotus trackside operations director Alan Permane said: "It's not real from us. It's not even been thought about or discussed."

Lotus team principal and owner Gerard Lopez said: "Unless someone breaks and engine or a gearbox, there are going to be 18 cars on the grid tomorrow."

Lopez added: There is a lot of frustration up and down the paddock. It is a big thing but some people have probably tried to make a conspiracy theory about it. For sure we're going to race this weekend and that's it.

"We now need to stop talking about stuff and do something. I hope something can be done in the next couple of weeks."

And the chances of Sauber not racing must be considered very small after their driver Adrian Sutil made it into the top 10 in qualifying for the first time this year.

That gives the Swiss team a good chance of scoring their first points, which go down to 10th place in the race, in what has been the least successful season in their history.

It is suspected Fernley is keen to fire a shot across the bows of F1 commercial boss Bernie Ecclestone, who came up with the current split in revenues and has struck individual financial deals with the teams in the past few years.

But Fernley's approach has been criticised by Christian Horner, team principal of world champions Red Bull, who said: "If you are going to threaten something, you have to be prepared to go through with it."

The Texas race is one of the most important on the calendar in commercial terms because it provides a foothold into the largely untapped potential of the vast US market.

The event is in only its third year, and was established following five years without a race in the States - Indianapolis failed to renew its contract beyond 2007 following the catastrophic 2005 race there, in which only six cars took part because of a row over tyres.

Challenged on the wisdom of such a plan in that context, Fernley said: "Look, those team owners are three of the most dedicated Formula 1 fans in the world and don't want to hurt F1. But at the moment, F1 is hurting them."

F1 has revenues of $1.8bn (£1.1bn) and 63% is passed to the teams, but it is the way that money is shared out that causes problems for the less successful outfits.

The money is split according to a complicated formula related to a team's recent results and historic success, and which is heavily skewed in favour of the big teams.

Marussia and Caterham are not racing in the US or Brazil next week and although they are said to be hoping to return for the final race in Abu Dhabi, this is considered unlikely.

Adding to the smaller teams' problems is the fact sponsorship money has been hard to generate since the global financial crash at the end of the last decade, and the increased costs caused by the new turbo hybrid engines this season, which have at least doubled in price compared with last year.

Force India have also long complained that they are excluded from decision-making because they do not have a presence in the strategy group of six teams that proposes rule changes.

But they will be promoted on to it next season because they will finish sixth in the constructors' championship, and will therefore take from Lotus the slot reserved for the best-placed team not among the five permanent members, who are Ferrari, Red Bull, Mercedes, McLaren and Williams.

The contracts signed by the teams mean that Red Bull, Ferrari and McLaren may have to run third cars in 2015 if the grid is below 20 cars - it is now at 18 following the demise of Caterham and Marussia.

Ecclestone said he had proposed that the big teams supply cars to the smaller teams if the grid dropped below 20 cars, but that he would rather the grid stayed at least at that level.