Hamilton took his 10th victory of the season thanks to a late and brave move down the inside of Rosberg at Turn 12, after erasing the German's lead.

The result extends Hamilton's lead over Rosberg to 24 points with 75 available in the two remaining races.

Hamilton's victory will be another psychological blow for Rosberg, who arrived in Austin, Texas, admitting he needed "three strong races" to have any chance of beating his team-mate to the title.

The Briton looked the quicker of the two through the practice sessions, but Rosberg took pole after his team-mate hit trouble with his brakes in qualifying.

Rosberg converted that into a lead at the first corner but the fact Hamilton was able to follow within a second of him through to their first pit stops suggested the Englishman did indeed have a pace advantage.

The German's lead gave him the strategic advantage of making his first stop before Hamilton, on lap 15. Hamilton was in next time around and rejoined 2.8 seconds behind.

Five laps later, Hamilton was within a second of the leader and on lap 24 he made the decisive move.

He set the fastest first sector time of the race to that point, to put himself closer to Rosberg's tail as they entered the hairpin before the long straight.

Hamilton then dived for the inside at Turn 12, the hairpin at the end of the straight. 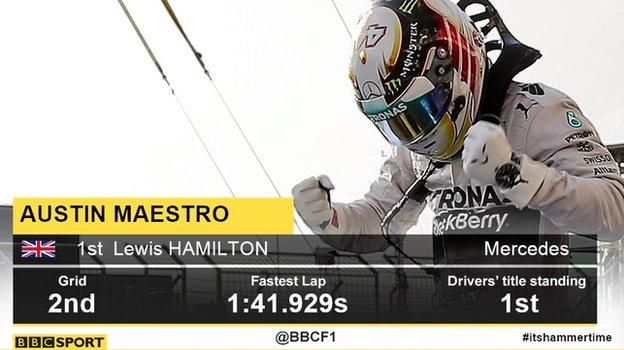 The move seemed to catch Rosberg unawares. He initially moved to defend, before realising that doing so would breach the rule that forbids changing line in the braking zone.

Hamilton, on the inside and alongside, ran his team-mate out to the kerbs, ensuring he held the lead.

Rosberg kept the gap between them stable at 1.4 seconds for a few laps before Hamilton extended it by a second over laps 30 and 31 to give himself some breathing space and then controlled the race to the end.

It was Hamilton's fifth victory in succession, 10th of the season, and the 32nd of his career, which means he has more career wins than any other Briton, passing Nigel Mansell, and has equalled the tally of his great rival Fernando Alonso.

Hamilton and Alonso are now equal fifth on the all-time F1 winners' list.

"I'm really grateful to be up front," he said. "It is such a privilege to be representing my country and to be at the top of the driver wins is quite special. The car was great today."

Behind the dominant Mercedes, Ricciardo fought back after dropping to sixth at the start from his fifth place on the grid.

The Australian passed Alonso's Ferrari at the restart after an early safety car period caused by Force India's Sergio Perez crashing into Sauber's Adrian Sutil on the first lap.

Ricciardo then passed Valtteri Bottas's Williams by making his first stop a lap earlier than the Finn, and did the same to the lead Williams of Felipe Massa at their second stops.

It was another stirring performance by Ricciardo, who has emerged as a major star in his first season in a leading team, putting team-mate and four-time world champion Sebastian Vettel in the shade.

Alonso took sixth, running a very long middle stint in the Ferrari, and holding off the fast-finishing Red Bull of Vettel on the last lap.

Vettel fought through the field after a late stop for the faster soft tyre, gaining seven places as a result after a pit-lane start and a strategy that required patience and care to do two long stints on medium tyres before his final push.

But the Frenchman was given a five-second penalty for an aggressive pass on Romain Grosjean, who finished 11th, promoting Maldonado to ninth and dropping Vergne to 10th.

McLaren's Jenson Button dropped from eighth to 12th in the final laps as he struggled on worn tyres.