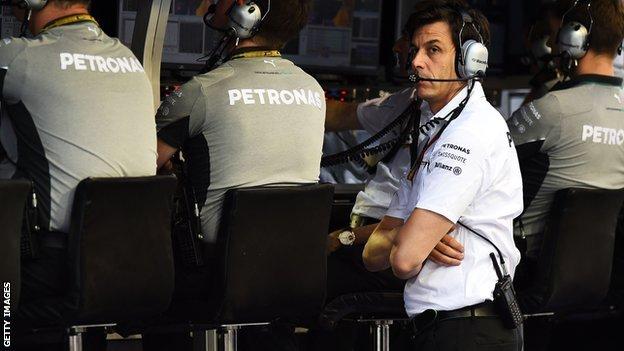 Mercedes F1 boss Toto Wolff says it would be a "nightmare" if Lewis Hamilton had a car failure in the title-deciding Abu Dhabi Grand Prix.

Hamilton heads into the final race of the season 17 points clear of team-mate Nico Rosberg and needs to finish second if the German wins to clinch the title.

"Clearly Lewis breaking down would be a nightmare," said Wolff.

"We want the championship to end in a straight and fair battle and not by one of them breaking down."

Hamilton has won 10 races to Rosberg's five this season, but has a relatively small advantage over the German as a result of a suffering more problems over the season.

The British driver's task is made harder because of the award of double points at the final race - otherwise, Hamilton would need to finish only sixth to clinch the title even if Rosberg won.

Wolff said he regretted the decision to introduce double points this season. It was pushed by F1 commercial boss Bernie Ecclestone but agreed by all the major teams and governing body the FIA.

"We have had a big backlash from the fans and many vocal personalities who don't like the system," Wolff said.

"I have been a racing driver myself and I wouldn't have wanted to have double points. The decision we all took together probably wasn't the right one and we need to change it for the future.

"But the rules are how they are and whoever scores the most points will be the world champion."

Wolff said he did not mind which of the two drivers won the title.

"I care about both of them in an equal way," he said.

"They are both great for our brand because they are different personalities and great racing drivers so it doesn't matter who becomes world champion."

Even if Hamilton did suffer a car problem that prevented him becoming champion for the first time since 2008, Wolff said he expected him to be in title contention again.

"As much as we in the team don't want that to happen, it wouldn't be the end of the world," added Wolff.

"Lewis will hopefully have many more opportunities to win another championship or more championships than this one."

Hamilton's contract with Mercedes lasts until the end of 2015 and the two have agreed not to talk about renewing it until after the season has finished.

Wolff added: "We want him to stay, for many more years. He is great for the team. He is part of the family.

"The relationship we all enjoy having is more than just a professional racing relationship between driver and team. It is on a different level.

"So on the Monday or Tuesday after Abu Dhabi we will sit down and discuss and hopefully find a solution quickly."