Rosberg was 0.386 seconds faster than his Mercedes team-mate as Hamilton managed to secure second place despite an error-strewn session.

Hamilton is 17 points ahead of Rosberg and needs only to finish second to the German in the race to secure the title.

Hamilton faces an evening of decisions about how to approach the race after missing out on pole.

He was fastest in the second knock-out part of qualifying as Rosberg managed only fourth place after making his own mistakes.

But, when it mattered in the top 10 shoot-out, it was Rosberg who got the job done and Hamilton who made crucial errors.

Rosberg set the benchmark with a lap of one minute, 40.697 seconds as Hamilton looked on course to at least match him before running wide at the penultimate corner and locking a wheel into the final bend to end up 0.324 seconds adrift.

On their final runs, Rosberg set the target even higher, with a lap of 1:40.480. Hamilton could manage only 1:40.866 after what Mercedes boss Toto Wolff described as another "messy lap".

Rosberg, who won the last race in Brazil from pole and has now qualified fastest three times in a row, said: "It was a great day again.

"We did a good job sorting out the car. I was really happy with the set-up and I got a good lap in at the end.

"But it is only one step, a small step. I was hoping, who knows, there could be a Williams between the two of us and that can always happen tomorrow.

"I need to get the job done and continue on the sort of form I had in Brazil. I am sure it is going to be a great battle between the two of us. Of course I hope for more than that, some kind of help from Lewis."

Hamilton said: "I genuinely didn't have the best of laps but it was still a good qualifying session, I really enjoyed it. But tomorrow is the special day."

He said his approach to the race would be "the same as always".

The Williams drivers Valtteri Bottas and Felipe Massa were third and fourth.

Bottas was 0.545 seconds behind Rosberg, suggesting the two Mercedes will be untouchable in the race on Sunday.

But the pair were later excluded from the qualifying result after the FIA ruled their cars' front wings were too flexible under aerodynamic load.

Toro Rosso's Daniil Kvyat was an impressive seventh, ahead of McLaren's Jenson Button on a potentially crucial weekend for himself and team-mate Kevin Magnussen.

Magnussen was 0.323 seconds behind the 2009 world champion in the second session and qualified 11th on the last race weekend before McLaren make their decision about who will partner Fernando Alonso, who is joining the team in 2015.

Alonso qualified 10th, beaten by team-mate Kimi Raikkonen for only the third time this season after making a mistake and running wide.

Englishman Will Stevens, making his grand prix debut for the revived Caterham team, qualified last, but a respectable 0.555secs behind his experienced team-mate Kamui Kobayashi. 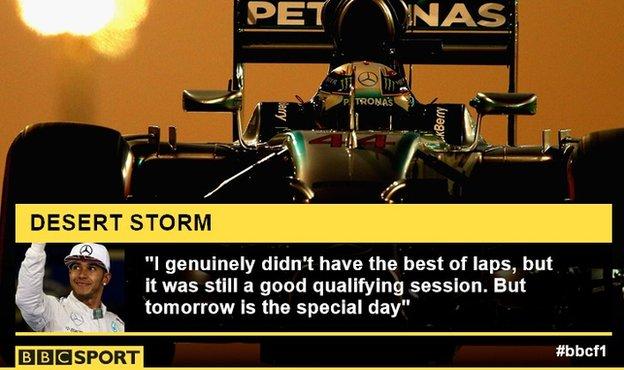