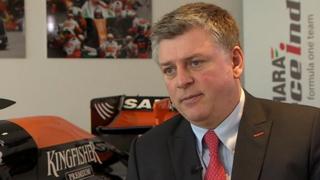 There are concerns over the sustainability of F1 teams, with Caterham failing to complete the 2014 season, and Marussia revived as Manor Marussia after going into administration.

Silverstone-based Force India are one of 10 teams lined up for the 2015 season, which starts in Australia on 15 March.