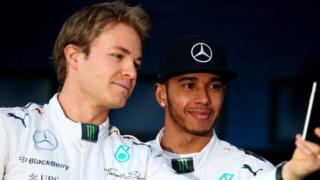 Presenter Suzi Perry is joined by David Coulthard, Ben Edwards and Allan McNish to discuss who has the upper hand at Mercedes before the opening race in Australia on Sunday.

BBC F1 co-commentator Coulthard believes we will see the rivalry between Nico Rosberg and Lewis Hamilton continue in 2015, with both "evenly matched" on the track.

BBC F1 analyst McNish says Rosberg will be there to pick up the pieces if Hamilton fails, while TV commentator Edwards is sure Mercedes will allow their drivers to race each other again this season.