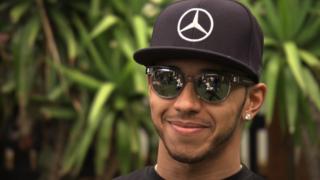 Speaking to BBC pit-lane reporter Lee McKenzie, Mercedes driver Hamilton says that he is only focusing on winning the 2015 title, and not looking back at last year's achievements.

The Briton is looking to become the first ever back-to-back British world champion, beginning his title defence at the Australian GP this weekend.