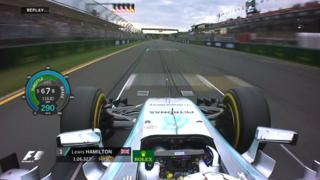 Hamilton's lap of 1m 26.327 was over half a second quicker than team-mate Nico Rosberg, and a massive 1.391secs clear of Williams' Felipe Massa.

Meanwhile, McLaren produced their worst performance for six years as their big-budget new engine partnership with Honda got off to a terrible start with Jenson Button and Kevin Magnussen starting on the back row of the grid.