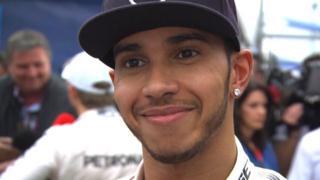 Hamilton qualified more than half a second faster than his Mercedes team-mate Nico Rosberg, who says he will "give it everything" to reduce the gap during Sunday's Grand Prix.

Rosberg won in Australia 12 months ago, while Hamilton last took victory at Albert Park in 2008.