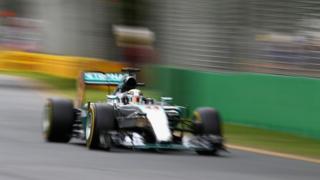 Hamilton storms to pole in Australia

The world champion beat team-mate Nico Rosberg by more than half a second as Mercedes utterly dominated, with Felipe Massa third for Williams.

Meanwhile, McLaren produced their worst performance for six years as their big-budget new engine partnership with Honda got off to a terrible start.