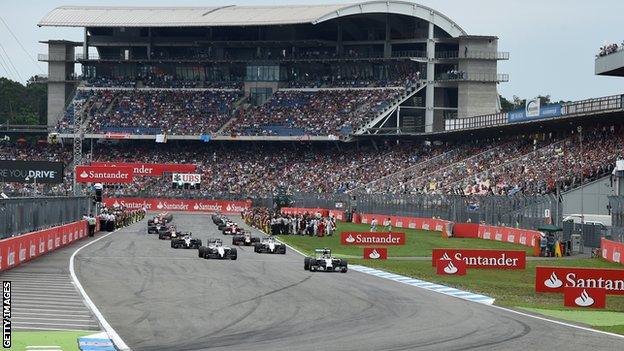 Formula 1 looks almost certain to be without a German Grand Prix this year - and no-one knows whether it will ever return to the calendar.

Why is the sport in this mess and what will happen now?

A rich F1 heritage is no longer enough

The last time Germany disappeared from the calendar was in 1955. The race's history stretches back to 1926. Only Belgium and Italy have held races for longer.

Oh, and France, but it lost its race seven years ago and has next to no hope of a return.

France is where motor racing started. It held the first grand prix in 1906. And yet when the country could not come up with a financial deal to sate the ever-increasing demands of Bernie Ecclestone,

F1's tsar had no compunction about cutting it free. So much for the value of heritage and history.

Ecclestone has also said he will not renew Italy's deal when it expires next year, claiming it was been "disastrous" from a "commercial point of view".

To many, an F1 calendar without Monza is unthinkable. But then that's what people thought about Germany, too.

Many within F1 believe Ecclestone's priorities are out of whack, that too much focus is given to profit and not enough to what is good for the sport.

After all, F1's soul is in Europe, as well as much of its television audience.

Yet because the circuits struggle to make the races work on financial grounds, Lewis Hamilton and co increasingly race in the likes of Bahrain and, from next year, Azerbaijan.

But who, honestly, thinks it is better to have a race in an oil-rich Caspian state with a questionable human rights record than in the biggest economy in Europe?

But are Germans falling out of love with F1?

The Nurburgring and Hockenheim alternate as hosts of the German Grand Prix because they find it too expensive to do it every year.

When the Nurburgring went bust, Hockenheim was asked to step in. But, with only four months to the race, it clearly felt it did not have time to sell enough tickets to make the event a financial success.

It was hard enough to lure crowds to Hockenheim when it had fair warning. Last year, there were almost empty grandstands for practice, while around 50,000 turned up on race day.

And this in a country that has a four-time world champion in Sebastian Vettel, the world champion team in Mercedes, a title contender in Nico Rosberg and three of the 20 drivers.

Compare the Hockenheim figures with the masses who flocked to see the British Grand Prix at Silverstone last year. Almost 330,000 turned up over the entire four days, with 120,000 on the day of the race.

Mercedes even stepped in to try to help, offering a limited level of financial support to Hockenheim. But they were reluctant to go too far, in case it set a precedent.

Does Ecclestone have the answer?

His view is that a grand prix has a minimum value, that it is right that circuits pay top dollar for the most-watched annual sport in the world. But even he accepts that not everyone should pay the same.

Tracks such as Silverstone and Monza, which have historical value, pay less than Bahrain or Russia, which don't. And Monaco pays nothing at all.

Even then, there are genuine fears that traditional venues are under a very real threat. For the likes of Britain, Germany and Italy, where state support is minuscule compared to countries that use F1 to sell a positive global image, even the reduced fees are high enough to risk putting them out of business.

Why does Ecclestone demand such high fees?

Partly because of the stature of the event. He does not want to under-sell F1. Partly because the sport's biggest shareholders, to which Ecclestone answers, insist on it. For them, the sport is there to make them money.

Some argue that money is at the root of the sport's current financial ills. F1 has global revenues of something like $1.5bn, yet four of its teams are struggling to survive.

Is there something wrong with the sport's business model? Some teams certainly feel that way.

So what's the solution? There are two.

But to do the first is asking an 84-year-old billionaire to change the business practices that have made him such. And to do the second is asking a venture capital group to change its DNA.