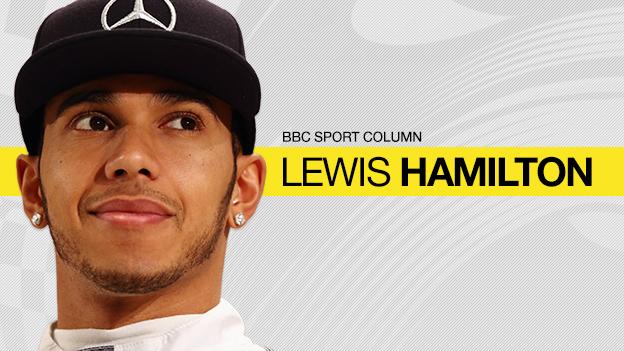 It feels good to be going into this weekend's second race of the season in Malaysia with a win already under my belt and in the lead of the championship.

Of course, sport is all about taking things one step at a time, focusing on the event you're in at that moment, but winning in Australia two weeks ago was a great first step.

It's such a difference from last year, when I had to retire from the first race of the season and was 25 points down in the championship before I had even got going.

Last year, I left Melbourne pretty much as low as you could be from a sporting point of view and came back strongly here in Malaysia.

This year, it has started with the most positive weekend possible, but I am going to approach this weekend with the same attitude as I did last year and try to repeat the result, which was one of my best races of the year.

I have stayed over in Asia since Melbourne, which I have done every season since I started in Formula 1.

On one level, it's a good idea - you stay on the time zone and you can get acclimatised to the heat and humidity for what is possibly the toughest race of the year.

But I'm not sure I will do it again if there is a two-week gap between the two races next year because it has felt like a very long stay.

You lose so much time that you could put to better use, whether that is at the factory, with friends and family or just being comfortable in your own bed.

F1 is about excellence not equalisation

My Mercedes team obviously had a strong weekend in Australia, and we have picked up pretty much where we left off last year.

That has led some people to call for the engines to be equalised in F1 to create closer competition, but you won't be surprised to hear that I think that is a bad idea and would be very unfair.

F1 is about the best drivers competing against each other for the best teams producing the best cars they can.

Equalising performance between teams runs completely counter to the idea of F1 and would be very unfair for us.

After years of trying, we have finally got ourselves into a position where we have the best car and have done the best job with the same rules as everyone else.

It's not like Red Bull or Ferrari have less money or fewer resources than Mercedes. We have just done a better, more efficient job.

That's what happens from time to time in F1.

At the beginning of the 21st century, Ferrari were dominating and won five championships in a row. They were not equalised with everyone else - the others had to catch up, which they eventually did. And the same goes for Red Bull at the beginning of this decade.

Now it's our turn.

I understand that there might be a desire to improve the spectacle, but that sort of thing needs careful thought and planning, not knee-jerk reactions.

In any case, we are only one race into the season. We don't know how it will develop, and I expect this year to be very close again between me and my team-mate Nico Rosberg, just as it was last year - just as it has been many times between team-mates competing for the title before.

Glad to see Alonso back

I'm pleased to see that Fernando Alonso is back racing this weekend and that he is well again after the accident in pre-season testing that forced him to miss the first race of the year.

An accident such as Fernando's reminds you that F1 remains a dangerous sport. But there is a never a moment when I get in the car when I think something like that could not potentially happen.

Of course no-one wants to get injured, and we are all still very sad about Jules Bianchi's accident last year in Japan.

With Fernando, I think it's still unclear exactly what happened to him and I will be interested to hear what the FIA, F1's governing body, says about it.

It's great for F1 that he is back out on track, but it is going to be a hard year for him.

He left Ferrari, who had been very loyal to him for a long time, on what I don't think was a particularly good note, and that team are looking pretty awesome this year. They have done a great job to become the second fastest team and have a lot of potential to keep improving. And he has gone to McLaren, who are having a tough time.

I would much rather he was at the front racing with me. You want to be competing against the best of the best, and he is certainly that.

A proud moment for my family

You might have seen in the news that my brother Nic is to race this year in the British Touring Car Championship.

As you can probably imagine, it has not been easy for Nic being the sibling of someone who is successful at something, and the fact that he has a disability has made things 10 times harder for him in life than it was for me.

But he is a massively determined and motivated young man and he has worked really hard against all odds to get to where he is.

Nic has cerebral palsy, and when he was born my dad and step-mum were told he would not walk.

To go from being in a wheelchair, through having a big surgery when he was five years old to be now racing cars against and beating people who have no disability is hugely inspiring.

I am excited for him.

Naturally, being the older brother, I worry for him and always want him to be seen in the best light and for things to go his way, because he is such a nice kid.

It's going to be hard for him, though - he only has five days of testing at the moment before the season starts.

But he always wants to do things on his own. That's the Hamilton stubborn streak coming out and I can tell you, he is so much more stubborn than me!

Obviously, I hope it goes well for him, but it's ultimately not just about winning, it's about going out and competing as an equal despite having a disability.

What he can do in a car, despite everything he has against him, is pretty special.

End of an era at Top Gear

Because I've been away for some time, I haven't really been following what's been going on with Jeremy Clarkson.

All I can say is that Top Gear is a great show, people love it all around the world and I have very much enjoyed being on it and driving the reasonably priced car.

Wherever I am in the world, people are always saying: "Hey, when are you going on Top Gear again?"

Jeremy has that really cool voice, a great passion for cars and his laid-back, classy on-screen attitude was really cool.

I hope the show continues, but it's hard to think of it without him because, really, Jeremy is Top Gear.