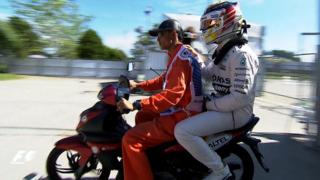 Lewis Hamilton stops his Mercedes out on track during first practice for the Malaysian Grand Prix.

The reigning world champion missed most of first practice and a lot of the second session at Sepang, and told BBC Sport his weekend had been "heavily compromised".

Despite his engine problems, Hamilton recovered to set the fastest time in second practice.