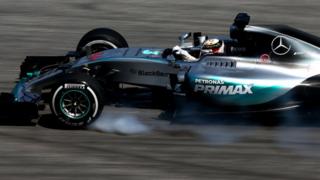 Lewis Hamilton sets the fastest time in second practice for the Malaysian Grand Prix despite a session punctuated by technical problems.

Hamilton missed the first session and the start of the second with an engine problem but was still 0.373 seconds clear of Ferrari's Kimi Raikkonen and his Mercedes team-mate Nico Rosberg.

Ferrari's Sebastian Vettel and Manor Marussia's Roberto Merhi both suffered spins at Turn 11 during the session.