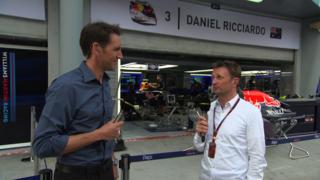 Will Red Bull and Renault split?

Tom Clarkson is joined by Allan McNish for Inside F1 as they discuss the relationship between Red Bull and Renault.

The manufacturer has come in for criticism after Red Bull finished a lap down on Mercedes' Lewis Hamilton in Australia, although Renault chief Cyril Abiteboul accused Red Bull's Adrian Newey of lying after he blamed the car's problems on the engine.

The pair also look back on the first two practice sessions from the Malaysian Grand Prix as Lewis Hamilton sets the fastest time, and discuss the return of Fernando Alonso.