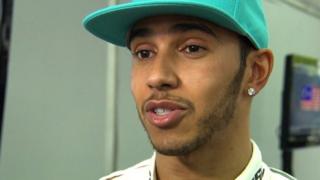 Lewis Hamilton says the start of the Malaysian Grand Prix can be "a bit of a nightmare" due to the long run down to the first corner.

The Mercedes driver was speaking after claiming pole position for the race at Sepang, with his team-mate Nico Rosberg also revealing his plans to "attack" Ferrari's Sebastian Vettel off the start line after qualifying third.

Both drivers dismissed questions about their apparent disruptions to each other's laps during the final part of qualifying.