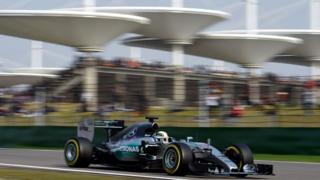 Lewis Hamilton becomes only the fourth driver to score five or more poles at one circuit after taking top spot in qualifying for the Chinese Grand Prix.

The world champion beat team-mate Nico Rosberg to pole by just 0.042 seconds on his final run, with Ferrari's Sebastian Vettel third but nearly a second off the pace of the two Mercedes.

Hamilton now joins Ayrton Senna, Michael Schumacher and Juan Manuel Fangio in being the only drivers to score five or more poles at one track.

I want to have a positive impact - Hamilton

Woods to compete with 11-year-old son