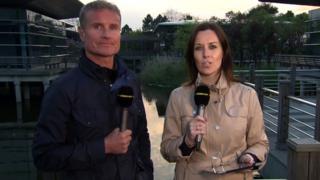 Inside F1: 'Hamilton in fantastic form'

BBC Sport's Lee McKenzie hosts Inside F1 in the company of David Coulthard following qualifying for the Chinese Grand Prix.

Coulthard says Lewis Hamilton is in "fantastic form" as he became only the fourth driver in history to score five or more poles at one circuit after taking top spot ahead of his Mercedes team-mate Nico Rosberg.

Ferrari's Sebastian Vettel was third but nearly a second off the pace.