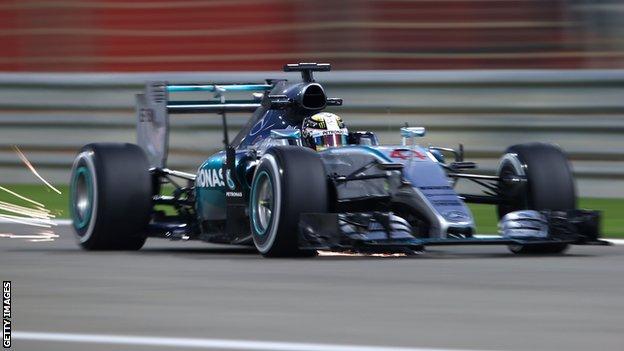 Mercedes drivers Lewis Hamilton and Nico Rosberg say they face a serious threat from Ferrari at the Bahrain Grand Prix.

Rosberg and Hamilton set the pace on one flying lap on Friday but in race trim Ferrari could have an advantage over the world champions.

Rosberg said: "We are very quick on one lap again and Ferrari are very dangerous on the long run.

"They have serious pace. It looks like they are a genuine threat."

Hamilton added: "Ferrari will be very close. From what I can see, they look good on the long runs."

Rosberg pipped Hamilton by 0.115 seconds on outright lap times, with the Ferraris of Sebastian Vettel and Kimi Raikkonen about half a second behind.

But when the teams did their 'race-simulation runs', on which they fill up the cars with fuel to see how the tyres might last in the race, Ferrari were quicker.

Vettel was on average 0.6secs a lap faster than Rosberg when they were both running the 'soft' tyre, which will be the main one used in the race.

Hamilton did not do a representative run on the soft and the exact fuel loads in the cars - which can make a significant difference to lap time - are not revealed by the teams.

Mercedes are haunted by their experience in Malaysia two races ago, when the Ferrari's more gentle tyre usage in the race helped Vettel to victory.

Hamilton said he felt Mercedes were not in the same position as they were there, saying: "It is not going to be as hardcore as Malaysia from what I can see."

Rosberg agreed, but said he was concerned about the Ferrari's outright speed in race trim.

"The pace of the Ferraris is very worrying," Rosberg said. "In qualifying we are much quicker but in the race they are quick.

"Tyre wise, it is pretty straightforward; both tyres are quite robust. It is just the absolute pace which is important."

Vettel, who finished third behind Hamilton and Rosberg in cooler conditions in China last weekend, said: "It looks pretty close but we know that Mercedes are turning up their engines for qualifying. They are still bit ahead. The closer we can get, the better it is."

Asked about his chances of winning, Vettel said: "It is always possible. Most important, we feel good inside the car and we have a good platform to work from. We will try to improve overnight and go from there.

"In the end, we need to be quick with whatever conditions we have. China was a lot cooler and I don't think we were slow. Also you need to understand that Mercedes has a strong package and it doesn't disappear.

"If we can be a bit closer this weekend, it is already a big step."