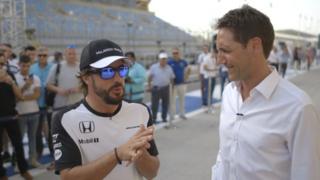 BBC Formula 1 pit-lane reporter Tom Clarkson takes McLaren's Fernando Alonso for a trip down memory lane as they look back at his career so far in F1.

Spaniard Alonso started in 2001 with Minardi, who are now Toro Rosso, before heading to a very successful stint with Renault where he won two world titles, in 2005 and 2006.

The 33-year-old Spaniard is now back with McLaren after a troubled spell there in 2007 and he is confident they will be competitive this season in Spain.