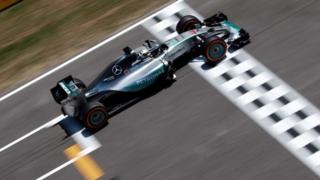 Lewis Hamilton sets the fastest pace in second free practice for the Spanish Grand Prix at the Circuit de Catalunya.

Red Bull's Daniil Kvyat was fifth ahead of Toro Rosso's Max Verstappen and the improved McLaren of Jenson Button.