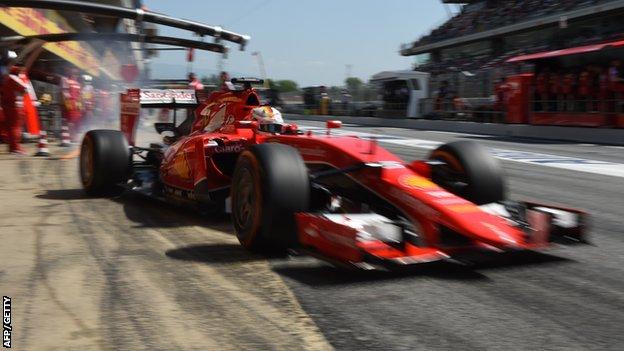 Rosberg was 0.156 seconds quicker than Vettel, with Hamilton 0.045secs adrift.

The times suggest a major step forward for Ferrari after Mercedes dominated throughout Friday practice.

The Englishman's team-mate Fernando Alonso was only 13th, 0.3secs behind Button after making a mistake at the final chicane on his fastest lap.

But McLaren appear to have made further progress as they and new engine supplier Honda attempt to recover after a poor start to their relationship.

The relative pace of Mercedes and Ferrari suggests a close battle for pole position when qualifying starts at 13:00 BST.

Hamilton, who had a dramatic spin on the exit of the 150mph Turn Three without hitting anything, is going for his fifth pole in a row this season, and leads the championship by 27 points from Rosberg after four wins and a second place in the first five races of the season.

Rosberg knows he has to out-qualify Hamilton to start the process of catching his team-mate.

The Barcelona track is one of the hardest on which to overtake all season, and has the highest percentage of wins from pole position of any track on the calendar.

Vettel - a point adrift of Rosberg in the title race - will be trying to at least split the Mercedes, while Raikkonen will be hoping for better after a mix-up in final practice, which put the car on the wrong settings for his fastest lap, left him 0.8secs off Vettel.