Lewis Hamilton was beaten in qualifying for the first time this season as Mercedes team-mate Nico Rosberg took pole position in Spain.

The Spanish fans who flock to salute their hero Fernando Alonso had another name to cheer as Toro Rosso's Carlos Sainz Jr took a superb fifth.

Both McLarens made it into the second part of qualifying for the first time this season, another step forward for the team in their first season with new engine supplier Honda.

Alonso beat team-mate Jenson Button, for the first time this season in a session in which they have both competed, by 0.096secs and one place.

Rosberg headed into this weekend knowing he needed to beat Hamilton as he bids to get his championship campaign on track.

Hamilton has a 27-point advantage over Rosberg, with Vettel a further point adrift, heading into this race after three wins and a second place in the first four races of the season.

In beautiful Spanish spring sunshine, Rosberg has looked competitive all weekend, and he took the initiative by going fastest in second qualifying and then repeating the feat on the first runs in the top 10 shoot-out.

Hamilton asked for a balance change before his last lap but none of the front-runners improved on their final runs.

Rosberg said: "It's just important for the race because it's better to start first than second obviously. Psychologically, yeah, it's good. Feels great. I'm happy."

Hamilton said: "I just generally didn't have the pace today. Nico did a great job and I don't think I had the balance quite where I like it - tomorrow there is still a lot to play for."

At the back, Englishman Will Stevens again out-qualified his Spanish team-mate Roberto Merhi by 0.838secs.

Alonso's success over the years has transformed Spain's interest in F1 and this race is usually packed with fans as a result, but on Saturday it was the country's latest grand prix driver who grabbed the headlines.

Sainz's fifth place was the best performance of his career, and he said that he had not found it difficult to focus despite the extra attention on him this weekend.

"You have a lot more interviews, a lot more photos to take in the paddock, a lot more events and press conferences," he said, "but to be honest I did not realise I was in Spain until the Q3 in lap and suddenly I came out of my qualifying bubble and looked around and saw all the crowd cheering.

"I said: 'This must be for me.' And I was so happy and I realised I had done the job in my home grand prix. It felt like a pole position, to be honest, same feeling." 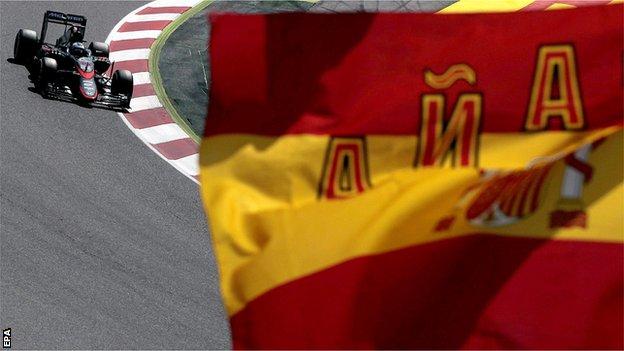