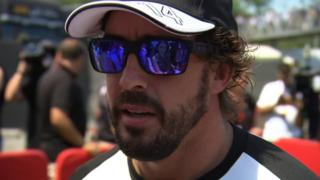 McLaren's Fernando Alonso says the "scary" in lap that ended with him nearly hitting a mechanic during the Spanish Grand Prix was caused by his brakes not working.

The Spaniard adds his team need to make "double steps" to be competitive again.

Team-mate Jenson Button, meanwhile, says the first 30 laps of Sunday's race were the "scariest" of his life.

Former F1 driver Mark Webber tells Suzi Perry and David Coulthard that McLaren are at least a year away from scoring points again.