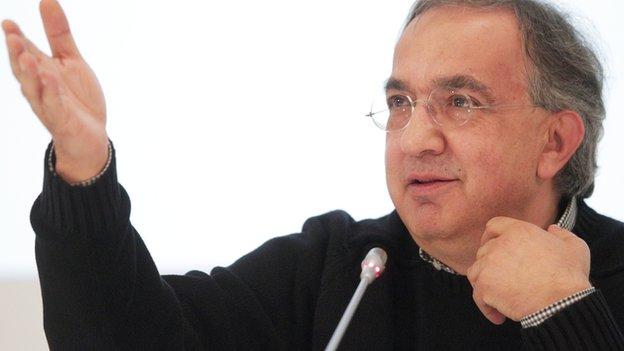 Ferrari president Sergio Marchionne says he wants to bring refuelling back to Formula 1 from 2017, despite opposition from teams.

Attending the Canadian Grand Prix, Marchionne admitted he was one of the main proponents of the idea.

The teams have investigated the effects of refuelling returning and found these would be almost entirely negative.

Asked if he still wanted it to return, Marchionne said: "I do," but would reconsider if findings were definitive.

Marchionne said refuelling might be the answer if combined with other changes under consideration, such as freeing up tyre choice, which is being discussed by teams and tyre supplier Pirelli.

He said: "You have to find out the impact that a combination of refuelling, tyre changes and a variety of other changes are going to have on the sport.

"Singularly it may not be the answer, but combined with other things it might be."

He added: "I am not sure what the findings are actually saying. Refuelling by itself has no value other than the fact it adds variability to the race.

"Fuel loads, how many times you refuel, when you refuel; they are all things that are important.

"Some people argue that you can come up with a deterministic model that will make everyone refuel at the same time, which is absolute hogwash. Especially if you combine that with a higher degree of freedom on the choice of tyres, which is I think is probably a lot more important than the refuelling strategy.

"So, I think there is a willingness on behalf of Pirelli to provide that flexibility to the teams which will create additional variability and will make the sport interesting to watch."

The idea to bring back refuelling, which was in the sport from 1994 to 2009, came out of a meeting of the rule-making strategy group last month. Marchionne and Donald MacKenzie, the boss of commercial rights holders CVC were its main proponents.

The strategy group asked a working group to look at its effects.

This study showed refuelling would dramatically reduce the number of on-track overtaking manoeuvres and that plans to have high-pressure rigs that made stops only three seconds would reduce strategic variation.

Race director Charlie Whiting is to present these findings to the next meeting of the strategy group, along with the information that the teams are uniformly opposed to the idea.

Mercedes F1 boss Toto Wolff said: "When we discussed it in the strategy group, it didn't have a lot of support.

"We agreed to explore it, to discuss it in the technical regulations meeting and the SRM. and analyse it properly.

"The feedback was 100% negative - too expensive, not safe enough, detrimental to the races and strategies, so it will go back in the strategy group and my opinion is it shouldn't happen. I'm not keen on getting refuelling back into F1."

Marchionne said he would listen to the findings before making his final decision.

"If the findings are such that it provides zero additional spectacle value, in the sense of creating something that the sport fans want, then I think we should stay away," he said.

"I haven't seen the evidence. We keep on hearing noises about what kitchen-concocted studies have yielded. I understand them.

"The question is you have to find out the impact of the combination of refuelling, tyre changes and variety of other changes are going to have on the sport.