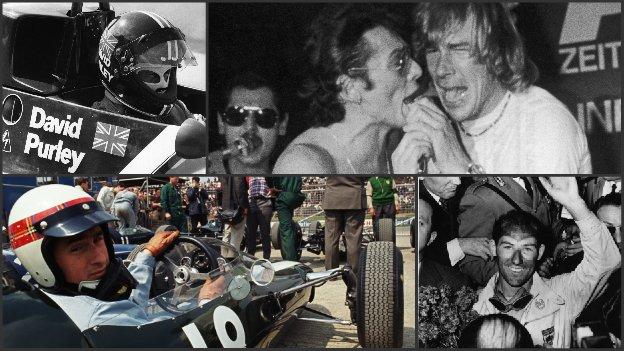 How do you define a hero?

A person who is brave and courageous? Someone who can boast outstanding achievements or who displays noble qualities? Maybe a mixture of all those characteristics.

If so, Formula 1 is packed with personalities who could be described as heroes. And it feels - this weekend more than ever - like Britain has the Lion's share.

Having asked you for your British F1 heroes, here's the best of how you defined the greatest figures of our sport, and why...

Successful on the circuit, a pioneer off it, Sir Jackie Stewart is undoubtedly one of Formula 1's great British heroes.

The Scot won 27 races and three world championships during his eight-year career in racing and also worked tirelessly to improve F1 safety. He was the first driver to wear seatbelts, who insisted circuits should be lined by barriers and who pushed for fire-resistant clothing, pit walls, six-point safety harnesses and crash structures in cars.

He continued his tireless campaign to improve safety after he retired in 1973 and played a pivotal role in moving F1 out of an era known for its frequent fatalities and into modern times.

Another safety pioneer was professor Sid Watkins, who served as F1's chief medical delegate between 1978 and 2004. As trackside doctor, he played a major role in saving the lives of several grand prix drivers after heavy crashes and was instrumental in transforming safety in F1.

Jake Nichol: Sir Jackie Stewart, wouldn't take no for an answer with Safety. Many have been saved.

Thomas Knights: Professor Sid Watkins. Amazing man, did so much for the sport.

James Humberstone: It has to be Sir Frank Williams. He created a legacy team that is ingrained in F1 history.

James Hunt. The ultimate rock'n'roll racer. Charming, charismatic, boisterous but in possession of a huge drive to succeed.

He lived the playboy lifestyle, drinking and partying all the while forging a successful career in F1, culminating in his 1976 world championship win.

F1 world champion in 1962 and 1968, Hill is also the only driver to win the Triple Crown of Motorsport: the 24 Hours of Le Mans, Indianapolis 500 and F1 world championship.

Jeremy Newlin: James Hunt - for all the wrong reasons...

Tony Crowther: Graham Hill, without doubt the epitome of 'British' and the best ever ambassador for any British sport, not just F1!

The entertainers of Hunt and Hill as well as pioneer Stewart would also come under this category for their world title wins, but there are others worthy of a mention.

Considered by many as the greatest is the legendary Jim Clark. His tally of 25 victories was a record at the time, coming in just 72 starts, while his two titles in 1963 and 1965 were exercises in crushing superiority.

Nigel Mansell, winner of the championship in 1992, went toe-to-toe with two titans of F1 - Ayrton Senna and Alain Prost - and his exciting, fighting style won him enormous adulation.

Then, of course there are the modern day drivers - Jenson Button winning the world title in 2009 and reigning world champion Lewis Hamilton, the Mercedes driver regularly breaking records and this year bidding for his third F1 championship.

Gemma Webb: Easily Jenson Button. He's a champion, down to earth and credits the fans and the team. Top bloke.

Nathan Tague: Aside from drivers, Adrian Newey. Absolute genius and the man behind countless title-winning cars.

Mr Keer: Has to be Graham Hill. Won the F1 championship, Le Mans and the Indy 500. And all with the grace of a jolly good chap.

Matt Claypole: Who else but Coulthard. He was often capable of matching the great Schumi. Plus he had some great radio messages.

In a sport where danger is always close by, it is not surprising there are plenty of tales of bravery, regardless of nationality.

The work of marshals in races throughout the world is undoubtedly worthy of mention, with the groups of volunteers risking their lives to ensure the smooth operation of a grand prix weekend.

Then there are the tales of individual acts of bravery. British driver David Purley was awarded the George Medal for his courage in trying to save fellow British driver Roger Williamson by trying in vain to get him out of his burning car at the 1973 Dutch Grand Prix. Williamson sadly died.

Emma Jayne: All the British marshals! The unsung ladies and gents who risk their lives, for free!

Lewis McMurray: As a driver Lewis Hamilton, but as a hero David Purley for his '73 Dutch GP heroism.