Governing body the FIA has confirmed a minute's silence will be observed in honour of Jules Bianchi 15 minutes prior to the start of the Hungarian Grand Prix on Sunday at 12:45 BST. (Formula1.com) 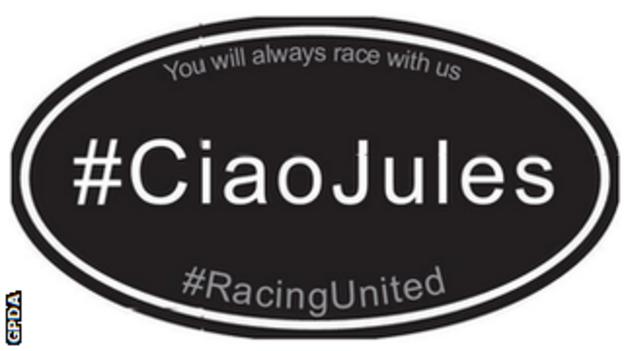 A sticker paying tribute to Bianchi will be made available to all F1 drivers in Hungary this weekend, courtesy of the Grand Prix Drivers' Association.

World champion Lewis Hamilton has asked his Twitter followers to help with ideas for his own sticker in memory of Bianchi.

Manor driver Will Stevens tweeted: "Arrived in Hungary for what's going to be an emotional weekend, but we race on! That's what we do and what Jules would want! #JB17 #CiaoJules."

Red Bull boss Christian Horner says he has "absolutely no doubt" the team "will get back to the front". (Daily Express)

Renault would receive a significant financial bonus by being declared an historic team should it decide to again become a works marque in Formula 1, according to the sport's boss Bernie Ecclestone. (Autosport)

Ecclestone will decide whether current suppliers Pirelli or Michelin will provide F1's tyres from 2017. (F1i.com)

Former England football captain David Beckham posted a tribute to the Frenchman after his death.

Tennis player Rafael Nadal has sent his condolences to the driver's family.

Bianchi's funeral will take place on Tuesday in his hometown of Nice, his family confirmed.

Force India team principal Vijay Mallya paid tribute to the Frenchman, who drove for the team as test and reserve driver in 2012. Mallya said: "We came to know an outstanding young man and a tremendous talent who was destined for great things in Formula 1." (Force India)