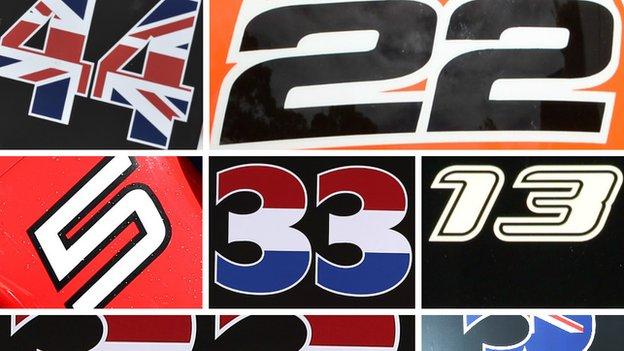 The summer holidays are almost over and the second half of the 2015 Formula 1 season is upon us.

After a couple of weeks of sun, sea and sand (or, in Lewis Hamilton's case, showing off your moves at a parade in Barbados), F1 drivers will be peeling themselves off the loungers and back into the garage.

But before the beach reading comes to an end, it might be worth taking a look at who has clocked up what during the season so far.

And yes, there is another driver who has as many penalties as Pastor Maldonado...

Only Hamilton, team-mate Nico Rosberg and Ferrari's Sebastian Vettel have completed every lap of every race this season (633). It means the trio have driven a total of 1,876 miles - the equivalent of driving from London to Moscow (with a few miles to spare).

In contrast, Fernando Alonso has completed the fewest laps of any driver this year with 363. At this stage last season, the Spaniard led the way with 698, during his last season with Ferrari.

Perhaps no surprises here as Lotus's Pastor Maldonado has retired on the most occasions in 2015, failing to finish in six races.

Maldonado and team-mate Romain Grosjean have earned six penalty points each in the past 12 months. Any driver who receives 12 points during a 12-month period will get an automatic one-race ban.

Hamilton has out-qualified his Mercedes team-mate Rosberg in nine of the 10 races so far. He also has secured the F1 'grand slam' of pole, fastest lap and victory on three occasions this season - in Australia, China and Britain.

Plenty for McLaren to mull over

It has been a season of struggle for McLaren so far and the chance to celebrate both their drivers completing a trouble-free race has been rare.

The rookie taking it to the max

Max Verstappen's 22 points makes him the top-performing rookie so far in 2015. All the more impressive when you consider the 17-year-old is yet to pass his driving test.

When it all goes wrong...

Races featuring the most retirements: Six, in Austria and Britain.

...when it all goes (mostly) right

Races featuring the fewest retirements: Two in Bahrain and Spain.

In 2014 after 10 races, the safety car had been deployed in five - Australia, Bahrain, Monaco, Canada and Great Britain.

After 10 races this season, the biggest winning margin was the 17.551secs Rosberg led Hamilton in Spain. The narrowest margin was the 0.714secs Hamilton led Rosberg across the line in China.

After 10 races in 2014, the biggest margin was the 30.135secs Lewis Hamilton put between himself and Valtteri Bottas at Silverstone. Hamilton was also on top for the closest finish of 2014, pipping Nico Rosberg in Spain by just 0.636secs.