Valtteri Bottas's Williams was third, ahead of Lotus's Romain Grosjean, who has a five-place grid penalty, and Force India's Sergio Perez.

Ferrari's Sebastian Vettel, winner of the last race in Hungary, was ninth. 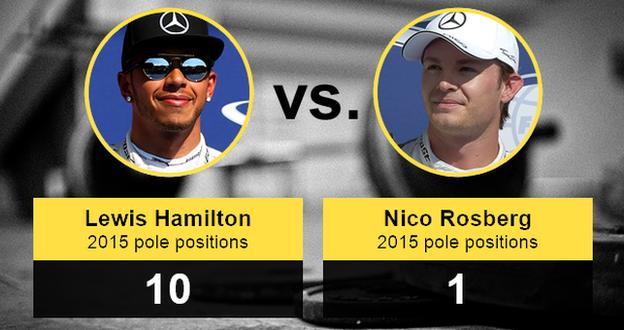 Hamilton had lagged behind Mercedes team-mate Nico Rosberg in both Friday sessions but solved his car problems to move onto another level on Saturday at Spa-Francorchamps.

The world champion's pole was won in the middle sector of the lap, which features the vast majority of the corners.

Hamilton was half a second clear of Rosberg there, while the German more or less matched him in the first and third sectors, which are long flat-out sections punctuated by a single slow corner.

It gives Hamilton the perfect platform on which to extend his championship lead, which stands at 21 points heading into the race.

Vettel came into Belgium after the four-week summer break on a high after his dominant victory in Hungary, which was facilitated by an error-strewn race by Hamilton.

Vettel and Ferrari had appeared set for a second-row grid slot in qualifying but they fell apart when it mattered.

The four-time world champion made a mistake in the final chicane that he said cost him 0.3secs and that was potentially the difference between third and ninth place - Vettel was less than 0.3secs slower than Bottas, but in that gap were five other drivers.

Team-mate Kimi Raikkonen failed to record a time in the second knock-out session after an engine failure and will start 14th.

Lotus are having a difficult weekend, with financial struggles beginning to tighten around them and threats of lawsuits.

But Grosjean was stunningly impressive to go fourth fastest and team-mate Pastor Maldonado, who had yet another crash on Friday morning, was eighth to put both cars in the top 10.

Perez was another surprise figure in the top five after a strong performance in the Force India.

Both teams were benefiting from the Mercedes engine, which was in the cars of all the top five.

Red Bull's Daniel Ricciardo was the fastest non-Mercedes powered car with his Renault engine in sixth and is likely to be fast in the race, although may struggle to pass people because of his straight-line deficit.

"Really happy today with the performance of the car and team," said Hamilton. "The car has been feeling great and it is a circuit where if you can get the right balance it is one of the most fun to drive.

"Sector two has always been a bit of a weak point. I know all the lines, but could not put the corners together - that was a very strong area for me [today]."

Rosberg said: "For sure I'm disappointed. I lost it a bit this morning in free practice but then I got the balance back for qualifying, but Lewis was too quick in the end and found quite a lot extra that I didn't have in my pocket.

"It is possible to overtake down to Turn Five, so my hopes are still high."

McLaren's engine partner Honda have produced an upgraded power-unit for this weekend and F1 boss Yasuhisa Arai claimed it would put them level on performance with the Ferrari engine.

That raised some eyebrows up and down the paddock, and as suspected Arai's claims turned out to be wildly optimistic.

The internal combustion engine part of the power unit is marginally improved, thanks to a new combustion design, but McLaren are still hamstrung by the huge shortfall in power and capacity of Honda's hybrid system.

Jenson Button and Fernando Alonso could manage only 17th and 18th places in qualifying.

Button was 0.442secs quicker than Alonso, who missed all of final practice with an exhaust failure, after what the Englishman described as "the best lap I've done for a long time".

The lack of hybrid performance, which means the engine runs out of electric boost long before the end of the straights, in combination with a full-throttle percentage round the lap of 70% meant McLaren were further off the pace than at any race since the Spanish Grand Prix in early May, at 103.5% of the pole position time.

They will start from the back because of penalties for changing many parts of the engine through the weekend, with each change having incurring either 10 or five places defined by a complicated system.

In total, the two drivers were hit with 105 grid places of penalties - 55 for Alonso and 50 for Button. But the punishment is academic because, following a revision of the penalty system last month, they will suffer no extra in-race punishment for not serving the full penalty.

Honda has fitted two of the new engines to each car this weekend to give itself a bigger pool of the upgraded design for the rest of the season.