Lewis Hamilton cruised to a dominant Italian Grand Prix victory to put a stranglehold on the world title - and was cleared of breaking tyre rules.

Hamilton's seventh victory this season puts him 53 points ahead of team-mate Nico Rosberg as the German retired.

Mercedes were investigated on the grounds the tyres were below the minimum permitted pressure.

But the stewards allowed Hamilton to keep his victory after ruling Mercedes had followed safe operating procedures.

Ferrari's Sebastian Vettel was second as Rosberg suffered an engine failure with three laps to go.

Hamilton survived a scare in the final laps when his team told him he had to drive flat out but not what the problem was.

It seems Mercedes were trying to get Hamilton to build a lead of more than 25 seconds in case of a penalty for the tyre pressure, which was 0.3psi lower than the minimum amount specified by Pirelli on safety grounds.

Hamilton crossed the line exactly 25.0 seconds ahead of Vettel.

Rosberg's left-rear tyre was also found to be below the required pressure - by 1.1psi in his case.

Hamilton's win, his most crushing of a season he has dominated from the first race in Australia back in March, came despite reliability concerns over an upgraded engine fitted to his car.

Both Mercedes drivers started the weekend with the new-specification unit, which used up all the team's seven remaining development 'tokens' in one go.

But Rosberg's had to be removed after the team discovered a contamination problem with it after final practice.

After checking Hamilton's engine, Mercedes decided it was safe to keep it in the car for the race, but the team admitted that it would be a nervous afternoon.

They also expected a major challenge from Ferrari, who had also introduced an upgraded engine for this high-speed track.

Hamilton was in imperious form. The 30-year-old built a 1.5-second lead on the first lap after concerns about an aggressive start from Ferrari's Kimi Raikkonen on the front row alongside him disappeared when the Finn's car bogged down at the start and he was swamped by the field.

Hamilton blasted away from Vettel in second place, building a 12-second lead in 20 laps, sometimes pulling away at as much as a second a lap.

His lead over Vettel was out to well over 20 seconds when suddenly there was a scare in the closing laps as he was asked to start producing flat-out laps.

It emerged that the reason for this was to build a gap in case Mercedes were given a time penalty for lower-than-permitted tyre temperatures on the grid.

But the stewards ruled that the tyres were at the correct temperature when fitted to the car and that the blankets which keep them warm were unplugged and at a lower temperature than the maximum permitted. 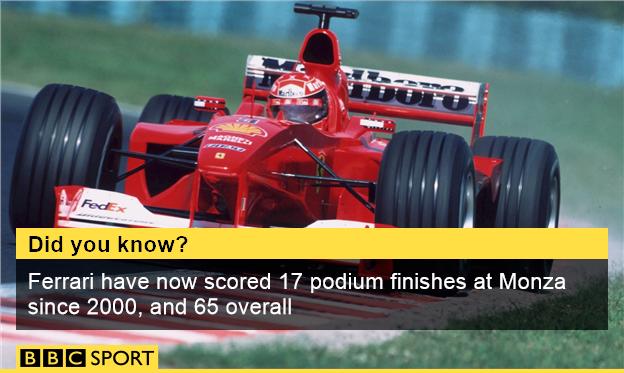 This lower temperature would mean the tyre lost pressure and would explain why it dipped below the minimum, which is why Mercedes were cleared of wrongdoing.

Rather than try to threaten Hamilton, who soon pulled his advantage out to more than 20 seconds, Vettel had to look backwards at the advancing Rosberg.

His fellow German was only five seconds behind once the two had completed their pit stops, after Rosberg leapfrogged both Williams cars in one go with an early pit stop and stunning first lap out of the pits.

Rosberg was at a disadvantage having stopped seven laps earlier than Vettel, but he inched towards the Ferrari, getting the gap down to 3.7 seconds with 12 laps to go.

With three laps to go, Rosberg was two right behind Vettel but then the Mercedes stopped with flames pouring from his engine at the second chicane.

The engine that had been fitted on Saturday had already done five races, and it seems the demands of Monza were too much for it.

Behind the Williams drivers, Raikkonen passed Force India's Sergio Perez for sixth place with three laps to go, moving up to fifth after Rosberg's retirement.

It was a good comeback but a disappointing result after such a strong qualifying performance.

The Mexican's team-mate Nico Hulkenberg won a close fight with Sauber's Marcus Ericsson, who was passed on the last lap for eighth by Red Bull's Daniel Ricciardo, whose team-mate Daniil Kvyat took the final point in 10th, both Red Bulls fighting up from the back of the grid.