Fernando Alonso has reiterated his commitment to McLaren, after initially casting doubt on his future following the Japanese Grand Prix.

After finishing 11th at Suzuka, Alonso told the BBC he was uncertain if he would still be with the team next year.

The Spaniard later clarified his comments, saying he wanted to see out the last two years of his contract.

He left Ferrari last year, two years before the end of his contract because he had lost faith they would ever be able to take him to a third world title. 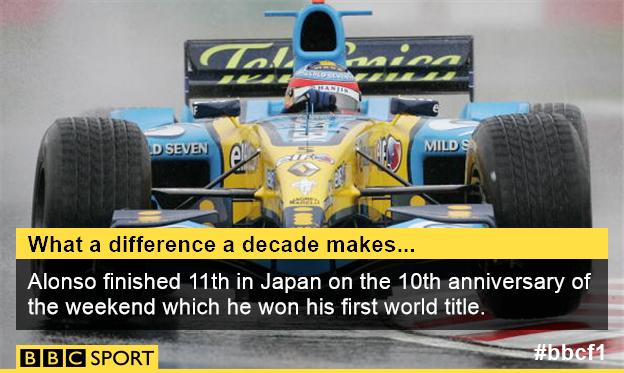 Alonso started Sunday's race in 12th and was up to ninth on the first lap but began to fall back as rivals with more powerful engines passed him on the straights.

Later in the race, after being passed by Max Verstappen's Toro Rosso, he said: "GP2 engine, GP2", before letting out an exasperated: "Rarh."

This was a reference to the final feeder category before F1, in which the cars have about 600bhp.

By contrast, the standard-setting Mercedes and Ferrari F1 engines have about 900bhp.

At its best, Honda's engine is at least 100bhp down on the Mercedes but it loses a further 160-180bhp in the latter part of the longest straights because its inefficient hybrid system runs out of power boost.

Team-mate Jenson Button complained the car's lack of power was dangerous when racing with rivals because the speed difference is so big.

Asked about the drivers' comments, McLaren chairman Ron Dennis said it was "not very constructive" when the team is trying to build a stronger relationship with Honda management.

He added: "I can understand it. It's not just one race. It is several races they have been experiencing this.

"Do I condone it? No. Am I going to go ballistic? No. I will handle it in my own way and my way is not in public."

McLaren have been faced with a weekend in which the future of both their drivers have been the subject of intense speculation, despite the fact both are under contract for next year.

Button has a contract for 2016 but McLaren have an option to terminate it before 30 September.

Dennis said: "We have two drivers. We want both of them in the team and it is as simple as that. We will have a winning team."

"Jenson has a two-year contract. It has an option to stop. I told Jenson - probably too late - that we have no intention of exercising the option.