Lewis Hamilton said it felt "unreal" after victory in the Japanese Grand Prix moved him level with his boyhood hero Ayrton Senna on 41 race wins.

"It's quite an emotional day. I'm full of joy and happiness and light," said the 30-year-old British driver.

He defended the first-lap overtake of Nico Rosberg, which forced his Mercedes team-mate wide and he dropped to fourth before fighting back to second.

Hamilton is now 48 points clear of the German in the title race. 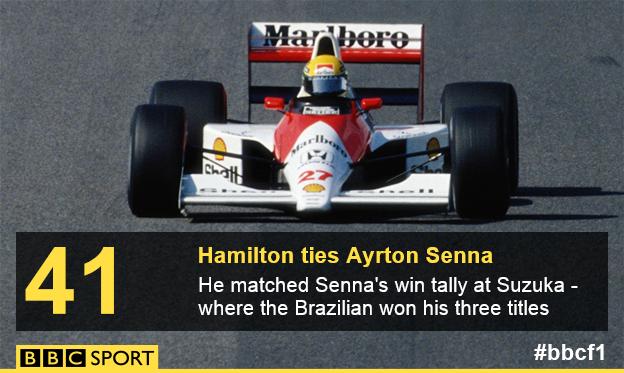 "I can imagine Nico was running out of road but that's what happens when you're on the outside."

Rosberg said: "It got really close on the exit of Turn Two and I had to back out of it there and that lost me the race.

"I haven't seen it on TV. For sure it was close. I had to avoid a collision. But it is difficult to comment now."

Sunday was Hamilton's 162nd race, one more than Senna started in a career that ended tragically at Imola in 1994.

The Brazilian won twice at Suzuka in 1988 and 1993 and Hamilton's victory was also his second at the circuit.

"For me to win here at a race where I loved watching Ayrton drive and to match his wins, it doesn't feel real at the moment," he said.

Rosberg and Hamilton were warned last year not to risk taking each other out in racing situations following an incident in the Belgian Grand Prix when they collided, leading to Hamilton's eventual retirement.

Rosberg was reprimanded by the team after that incident and the two drivers were warned that they risked their future at the team if they damaged each other's cars out on track.

But team boss Toto Wolff expressed no problems with the incident.

"Lewis had a better start and stuck his nose in," he said. "It was a tough corner for both of them."

Hamilton also defended his move in a BBC TV interview, pointing to footage that showed he was ahead as the two drivers began to accelerate out of Turn Two.

Asked if he ever feels sorry for Rosberg about coming second best in wheel-to-wheel racing, Hamilton added: "Rosberg was fair. He drives incredibly well and has done a great job this year.

"This is racing and that is what it is all about. There have been times when I have fallen behind. It happens."

Wolff added: "It is always very difficult to race your team-mate. It was a tricky situation for both. Lewis said he had understeer and he ran out of track and two cars side by side in Turn Two is difficult anyway."