Lewis Hamilton was beaten to pole position by team-mate Nico Rosberg as Mercedes dominated qualifying at the Russian Grand Prix.

Rosberg took his second pole in a row and third of the year as Hamilton was slower on his first flying lap and then made a mistake on his second.

Hamilton never looked comfortable on the Sochi track, and was outpaced throughout by his main title rival.

Bottas was 0.799 seconds off Rosberg with Ferrari's Kimi Raikkonen fifth ahead of Force India's Nico Hulkenberg.

Rosberg on top after Sainz crash

It was an impressive performance by Rosberg, who was also fastest in a final practice session truncated by a huge crash involving Toro Rosso's Carlos Sainz.

The Spaniard, whose car ended up underneath barriers at Turn 13 after he lost control at one of the fastest parts of the track, was taken to hospital, where it was found he was unhurt but is being kept in overnight for observation.

Hamilton pulled into the pits with two minutes of qualifying still to go after running wide at Turn 13 on his second flying lap trying to make up the gap to his team-mate.

It was only the third time in 15 races Rosberg had beaten him in qualifying.

"I'm very happy," Rosberg said. "It's been a difficult weekend because we didn't get much practice but qualifying worked out really well. It felt comfortable and I got some good laps in." 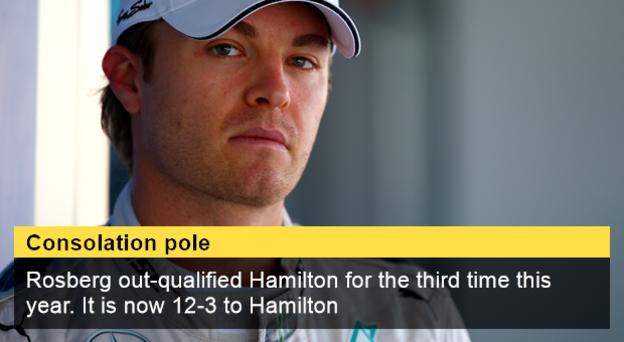 Hamilton, who won in Russia last year after starting second, said: "Difficult weekend for everyone. Nico did a great job in his lap."

He added he was "perfectly happy with the balance" of his car and it was "not such a bad race" to start in second.

Hamilton heads into the race 48 points ahead of Rosberg in the championship with a maximum of 125 points still available.

It was another eye-catching performance by Verstappen, the 18-year-old Dutchman beating both cars of senior team Red Bull just hours after team-mate Sainz's crash.

Verstappen prevented Red Bull's Daniil Kvyat from getting into the top 10 shoot-out at the Russian's home grand prix by just 0.095secs.

Kvyat was 0.209secs slower in the second session than team-mate Ricciardo.

Bottas's team-mate Felipe Massa was only 15th after being caught in traffic and then making a mistake and running wide.

No party for Alonso

Fernando Alonso had a disappointing qualifying on the occasion of his 250th grand prix meeting, knocked out in the first session and qualifying 16th.

Ahead of team-mate Button by 0.15secs on their first laps, Alonso was 0.405secs slower on their second runs, although his position was irrelevant as he will drop to the back of the grid as a result of a 35-place penalty for using too many engine components.

Button said the race would be "one of the most difficult" for McLaren because of the shortfall in hybrid boost from the Honda engine. This also causes the team fuel consumption problems, the Englishman said.