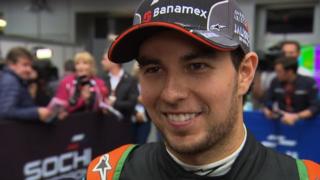 Sergio Perez admits he had settled for fifth before a last-lap crash between Kimi Raikkonen and Valtteri Bottas meant he finished third in the Russian Grand Prix.

The Force India driver had been running in third for the majority of the race after making his tyres last longer than his rivals.

After claiming the third podium of his career Perez says he is happy to have luck on his side for once and is full of praise for his "amazing" team.