The German converted pole position into a lead at the first corner and controlled the race from there, despite Hamilton pushing hard throughout.

Hamilton looked faster but in the turbulent air behind Rosberg's car he was unable to get close enough to try to pass his team-mate.

Ferrari's Sebastian Vettel was third ahead of team-mate Kimi Raikkonen.

Mercedes dominated the race but there was plenty of tension as Hamilton sought a way to try to beat his team-mate, his competitive desire undimmed by settling his third world title two races ago.

Hamilton made slightly the better start but was forced to the outside at the first corner and had to settle into second place in the early laps.

He stayed just over a second and a half behind until their first pit stops and then made a push to try to pass him in the first part of the second stint.

For nearly 10 laps, Hamilton was within a second of his team-mate, before his tyres began to lose their edge and he had to back off.

He pleaded with Mercedes to put him on a different strategy, but was told this was not a good idea because of the potential threat from Ferrari behind.

As it turned out, Mercedes did have to change their strategy, converting from two pit stops to three when tyre degradation turned out to be more severe than expected.

Hamilton came out from their final stop 1.5 seconds behind and with 20 laps to go.

But again he was thwarted in his attempts to get close enough to pass as Rosberg drove a strong race in front of him, helped by what some might have considered coaching over the radio form his engineer, which is not allowed. 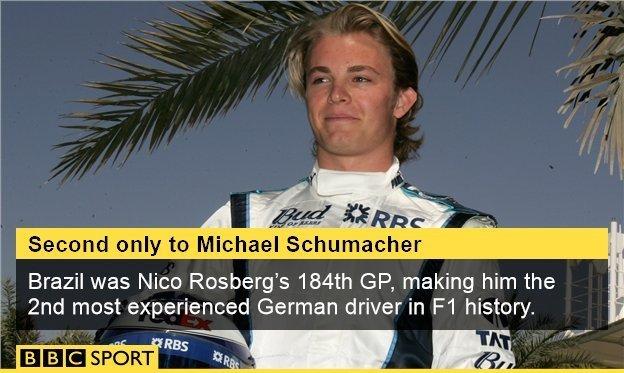 Rosberg paid tribute to the victims of the Paris terror attacks on the podium after the race.

"It was a great weekend for me. Of course everything is relative with what happened back in Paris, but it went perfectly. Lewis put on a great challenge but I was able to control it and I was really happy with that," he said.

Hamilton said: "I had good pace but you just can't overtake here. I was behind Nico and in traffic for some time and I just killed my tyres. I don't know if there was anyone else overtaking, unless you have a huge advantage you can't get close."

Vettel ran the Mercedes a touch closer than might have been expected, helped by doing a short third stint on a set of the faster but less durable 'soft' tyres.

But the German was still 11 seconds behind the Mercedes by the time the final pit stops were over, underlining how much work Ferrari have to do over the winter to try to catch Mercedes and mount a title challenge next season.

Vettel was well ahead of Raikkonen, who had a similarly large gap over Williams driver Valtteri Bottas, while Force India's Nico Hulkenberg held off Red Bull's Daniil Kvyat for sixth.

Williams' Felipe Massa had finished eighth at his home race but was excluded afterwards because his right-rear tyre temperature was 27C above the permitted maximum before the start of the race. Williams have appealed against the decision.

Verstappen "as good as Senna and Schumacher"

Max Verstappen again showed his potential as a future world champion on his way to 10th place, which became ninth after Massa's exclusion from the results.

The Dutchman pulled a brilliant overtaking move on Force India's Sergio Perez, taking the outside line around Turn One and holding on for the inside on Turn Two to make it stick.

He then repeated the move again on Sauber's Felipe Nasr later in the race to ensure he split the Lotus cars of Romain Grosjean and Pastor Maldonado.

BBC F1 analyst said: "I have compared him to Schumacher and Senna. I feel at this stage of his career he is that good."