Five pole positions in a row. Two consecutive wins. How different this world championship might have been if Nico Rosberg had found this form at the beginning of the season rather than the end.

For the first two-thirds of this season, it was the German scrabbling around for answers to explain his team-mate's superiority.

Eleven pole positions in the first 12 races were the foundations of Hamilton's cruise to a championship that was settled with four races to go.

This, Rosberg admits, led to some soul-searching and analysis as to what was going on and what he could do about it. And it has clearly worked. Now, with Rosberg revived, it is Hamilton's turn to question himself.

"Nico has been doing a fantastic job in qualifying," Hamilton said. "I have to think how things have changed. Since Singapore, there have been some changes to our car which seem to have shifted the direction of the ways [the respective fortunes of himself and Rosberg], so I need to figure out why that is and how I can get back on it."

So what has been going on?

Hamilton did not say what changes to the Mercedes car he thought had potentially made a difference to his qualifying form. Racing drivers are always coy about technical modifications - they are told to be.

But he did admit that he "has been a little less comfortable" since the modification and that he had "only just noticed it". Having done so, it is clear it is preying on his mind.

Even when Hamilton was in his run of poles, the margins between him and Rosberg were often small, in the hundredths of seconds, just as they have been recently. But until this recent turnaround, they always fell Hamilton's way, just as now they are Rosberg's.

Where has Rosberg improved?

One senior figure in the Mercedes team said the only difference he could see in the data was that Rosberg has improved in the braking phase into the corner.

He can tolerate more rear slip on entry than before, which is allowing him to be more aggressive and winning him time from the entry to apex. This is only gaining hundredths, not 10ths. But when there is only 0.08secs between the drivers over a lap, as in Brazil, that could be decisive.

What do the engineers and racing drivers mean by rear slip? It is how close the wheels come to locking during braking.

"I would call it the wheel under-rotating," says former grand prix driver Alexander Wurz, a former team-mate of Rosberg, who as president of the Grand Prix Drivers' Association is very close to many of the drivers. "If you steer at the same time, your tyre will start to slide.

"Some drivers are incredibly cautious and don't like it and some just don't mind because they know the tyre will come back when they release the brake pressure and stop the under-rotation. It is very much down to driver and driving style."

The intricacies of cornering speed

Hamilton's greatest strength has always been his incredible feel for this aspect of driving - and if Rosberg has found a way to match him, it neutralises his advantage.

This was seen in 2012, when at Red Bull Mark Webber was generally faster than Sebastian Vettel in the first half of the season.

Wurz says this was because the way the car's aerodynamics reacted during braking created an instability that was at odds with the way Vettel wanted to drive the car. 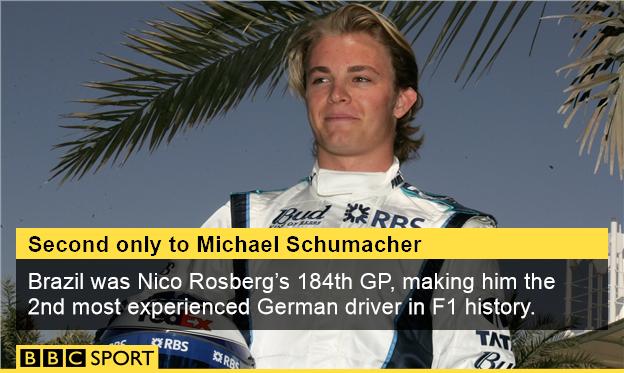 "It depends on aerodynamics, too," Wurz says. "For example, Vettel couldn't do that in the year where Webber was a bit faster in the first half-season. His rear aero was unstable in this slide phase and he didn't like it because he needed it, but he couldn't because the aero suddenly goes under yaw."

In other words, as the car was leaning to one side under cornering load, the aerodynamics did not provide consistent grip. As Vettel relies on a controlled rear slide on corner entry to generate his cornering pace, this neutralised his advantage over his team-mate.

What has changed technically at Mercedes?

Could the change in the Mercedes car Hamilton referred to be related to this?

The only publicly known tweak to the car is in the way Mercedes treat the tyres ahead of qualifying and race.

This is their response to tyre supplier Pirelli's demand for teams to run higher pressures as well as limiting the maximum temperatures of the tyre following the 200mph failures suffered by Rosberg and Ferrari's Sebastian Vettel at the Belgian Grand Prix in August.

The mandatory minimum pressures are higher than the teams would ideally like to run because they reduce grip - indeed their views were represented in a letter from governing body the FIA to Pirelli ahead of the Brazil race. Pirelli rejected the teams' complaints.

In an attempt to run tyre pressures as low as possible, but still ensure they meet Pirelli's mandatory minimums, Mercedes heat the wheels before the car goes out on track, which raises the tyre pressure when the car is static and allows it to fall down again when they are out on track for better performance.

Treating the wheels and tyres in this way can affect the front-rear balance during braking, and therefore could be an explanation for Rosberg's ability to brake later, accept more "slip" and attack the corner more confidently.

Asked about this, Mercedes executive director (technical) Paddy Lowe admitted: "Tyre pressures have affected changes [to the car] through that period."

Rosberg better rather than Hamilton worse

Rosberg says he has "raised my game". But Lowe is not convinced the explanation is technical.

"I would probably say Nico has upped his game rather than Lewis has lost it," Lowe says.

"The thing you need in qualifying is that ability to pull out an extraordinary lap, where you have pushed it all the way to the limit. To do that, you need a lot of human qualities, including staying calm under pressure.

"We've all seen it - when a driver does a lap and we say, where did that come from? And we've seen the opposite where the final lap slightly disappoints. It's all about confidence in a moment and there is no constant to that.

"It's about more human qualities than technical qualities."

The freedom to fly

Rosberg was asked during the weekend whether he felt he had relaxed into his driving more once he realised the championship was pretty much out of his reach.

When exactly that was is not completely clear, but in that context the key phase of the season was in September and early October.

In consecutive races, Rosberg retired with an engine failure in Italy, failed to capitalise on Hamilton's retirement in Singapore on a weekend when Mercedes were mysteriously uncompetitive, then was muscled out by Hamilton at the second corner in Japan.

His retirement in Russia was what enabled Hamilton to win the title at the next race in Austin, but the run up to that race was when it became clear only an unlikely series of problems for Hamilton could stall his momentum.

And it was about that time that Rosberg's run of poles started - first in inconclusive circumstances in a truncated qualifying session in Japan, and from there Russia.

Did this free Rosberg up mentally at the same time as a subtle tweak to the car also helped his driving, leading to a self-perpetuating spiral of confidence and performance?

"I think it is purely in the head because Nico was purely focused on Lewis before," Wurz says.

"Every radio call, every start he was pointing towards him. His focus was not 'I have to be the best', it was 'I have to beat Lewis'. And now it is very different. It is 'I want to beat Lewis' and so the focus changed. I think it's purely mental."

As to why that makes a driver faster, Wurz says: "Because the focus is on you and only you and just optimising what you have.

"Nico has the talent and speed, and we have seen that through his career. But if you only focus on the other guy, your attention is wrong.

"It is like in the office. If you are focused on politics rather than your product, you will feel it and sport is in your head. It is so clear."

Why the last race is important

There is only one race remaining this season, and Hamilton does not want to go into the winter on the back of a run of six poles and three wins for Rosberg.

"These next months are going to be really important and going to Abu Dhabi trying to get back on top of that," Hamilton said. "I have not lost any pace. I will be working hard for the next couple of weeks."

For these reasons, then, while the final race of the season might appear of little consequence, to Hamilton and Rosberg it is anything but.