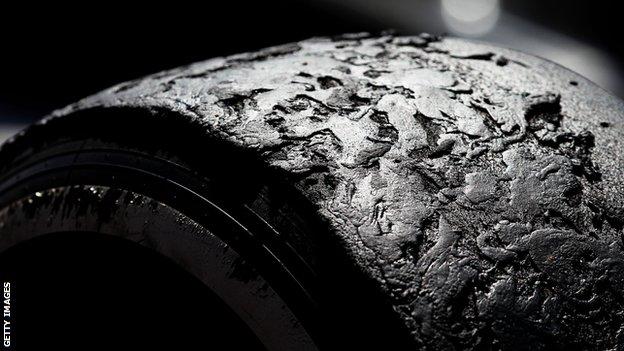 Who would be Formula 1's tyre supplier? It's a thankless task, especially in this era of control tyres by a single company.

When Pirelli entered F1 in 2011, the idea was to make tyres a subject of positive discussion again, change the fact that they were generally only mentioned when there was a problem.

Pirelli was tasked with producing tyres with a short life, that needed to be treated carefully, and which promoted pit stops and exciting racing.

Five years down the line, that's not quite how it has worked out. Races increasingly feature single pit stops, but drivers still can't push flat out. There have been criticisms from drivers, the teams have their frustrations, and Pirelli has been embroiled in a series of controversies.

But, despite its own complaints about the way it is treated in F1, Pirelli has committed to another three-year contract and will remain with the sport until 2019. So what happens now?

What was asked of Pirelli?

Pirelli entered F1 against a backdrop of concern that the racing was not exciting enough.

This was despite the fact that 2010 was one of the greatest ever seasons, with a five-way title battle between Fernando Alonso, Jenson Button, Lewis Hamilton, Sebastian Vettel and Mark Webber that distilled into a four-way shoot-out at the final race.

Pirelli motorsport director Paul Hembery says the company was asked by F1 commercial boss Bernie Ecclestone and the now-defunct teams' umbrella group Fota to "create more movement in races so driving style and chassis design could have an influence, more pit stops and that would hopefully create different strategies".

He admits this has not been entirely successful.

"Not all years," he says, admitting things are not working out that way "at the moment". "It was probably best in 2012." Which started with seven different winners in the first seven races, an all-time record.

Hembery says that happened because Pirelli was "very aggressive and created a very difficult set of tyres to manage - the technical challenge, the driving challenge, was so great".

Since then, Pirelli has grown more conservative. That approach started following the multiple failures during the 2013 British Grand Prix and has continued since because of concerns about the effect the increased power and torque of the new turbo hybrid engines would have on tyres.

The result has been an increasing number of one-stop races, although - by and large - tyre management has remained a key aspect.

Hembery admits that the new engines' "impact on the tyres was far less than we envisaged".

Is tyre management the right approach?

Not everyone is enamoured of the current F1 philosophy, nor of the tyres Pirelli has created.

The mechanism primarily chosen to create more pit stops was thermal degradation - where the tyres 'go off' once they go beyond a certain temperature, so drivers have to be careful how hard they push them.

Hembery admits that "Alonso said he wanted to go back to [tyres like in] the years of refuelling, when they were doing sprint racing. Those were the best years as far as he was concerned in F1, because it was maximum attack".

Alonso - arguably the greatest of his era, and therefore not a man whose opinions should be taken lightly - is not alone among the drivers in this view.

Hembery says: "It is obviously disappointing when you have been asked to do something and then not all the sport has bought into it. There needs to be a unanimous approach."

As for whether the current philosophy is the right one, Hembery says: "It depends what you want to achieve. If the sport is looking to create overtaking, an input from the driver, then creating any type of challenge for them is going to partially deliver that."

Hembery contends that tyres on which drivers can push hard every lap make for boring racing.

"If the drivers want to push on, we can do that," he says. "Then the next interview we do will be: 'Oh, it's really good this processional racing. The drivers have no input into the car now.'

"It's a fallacy that the driver in F1 can make a big enough difference, unfortunately, because the car is so dominant.

"We can take the tyre equation out, no problem, but you will go back to the years when I think Barcelona had three or four years of about five overtaking manoeuvres.

"You get to a situation where you are driving on rails. Which from one point of view would be very nice, but unfortunately you're driving flat-out and so is the guy in front of you and you are taking out a variable which to an extent is in the drivers' hands, which they no longer have to control."

But Vettel, a four-time champion, says: "In general what we need to follow another car closer in medium-speed, high-speed, slow-speed corners is more mechanical grip.

"So shift the percentage between aero and mechanical more towards more mechanical.

"How to do that? I think we need better tyres that allow us to go quicker. Drivers want to be quicker. So, I think the solution is very simple. Unfortunately, the sport is very political with different interests from different people."

This is a difficult discussion to resolve, not least because the data is polluted by the fact that the DRS overtaking aid was introduced at the same time as Pirelli tyres.

So it's clear that refuelling was bad for racing because after it was banned at the end of 2009 the number of on-track overtakes doubled in 2010, the last year of Bridgestone tyres.

In 2011, the first year of Pirellis and DRS, the number of on-track overtaking moves tripled compared to 2010. But since then, they have come down again.

In 2015, the average number of overtakes in a dry race is 30, compared with 21 in 2010, when there were durable, low-degradation tyres that could be raced hard throughout and no DRS.

Hembery has suggested that when tyre degradation is not a factor, strategy would become homogenous, with all drivers pretty much stopping on the same lap.

But, among drivers on the same strategy, that is pretty much what happens now. And the grand prix this year at which tyre degradation was arguably the lowest, Russia, was not only probably the most exciting dry race of the season but also featured a nine-lap off-set between the earliest pit stop and the latest in a generally one-stop race.

That data on its own is too flimsy to draw any firm conclusions. But if nothing else, it suggests that F1 bosses should at least look into whether the current approach is the right one.

Some - such as Webber - say the answer to that is no. He questions the value of overtaking moves if they are brought about by "artificial means", and says the essence of F1 - man and machine pushing the limits - has been polluted.

Pirelli's - and the teams' - frustrations

The teams are frustrated by certain aspects of Pirelli's tyres.

Engineers up and down the pit lane are unconvinced by the quality of the product they are being given to race.

An example of their frustration is that Pirelli has felt the need to impose higher pressures as a safety measure following the 200mph failures suffered by Vettel and Mercedes' Nico Rosberg at the Belgian Grand Prix.

The teams' views were recently represented to Pirelli in a letter from governing body the FIA's F1 director Charlie Whiting.

The essence of this was: that the tyres should be strong enough to run at what teams consider to be more normal pressures; that Pirelli's prescriptiveness was pretty much unique in F1 history; that teams would like to be given back control of tyre pressures; and could they please have tyres that would enable them to do that?

Pirelli rejected the complaints and Hembery is frustrated by the constant carping about its product - his biggest bugbear being that people too often forget the restrictions the company is operating under.

He points out that the current cars are close to historic highs in terms of downforce and engine power and that Pirelli is forbidden from on-track testing, which he says is needed to provide the data with which it could improve the tyres.

"Some teams have asked: 'When can we go back to normal pressures?'" he says. "But normal pressure might be 30psi if the aero loads go up 80%." Team engineers counter that with the observation that if Pirelli built a more robust tyre, with stronger casing, the higher pressures would not be required.

"The reality is we have been asked to do a certain type of job," Hembery says. "We've tried to deliver it and we are in the constraints of no testing."

He points out that what Pirelli has been asked to aim at - two- or three-stop races - is "a very difficult balance - 15 laps [of tyre life], you've got a three-stop race; 20 laps, you're on two. Five laps is the window you've got. That's why we need to do testing."

Vettel says: "It's fair enough to give whichever tyre manufacturer, in this case Pirelli, the chance to improve their tyres - but we need to run. But since the responsible people, the teams, whoever, can't agree on something, it will be difficult to make progress. Unfortunately the people who literally are paying for that are sitting in the grandstands."

For next year, following a request from the teams to have more freedom in tyre choice, Pirelli intends to increase the number of tyre types from four to five, with a new 'ultra-soft' tyre, and teams will have a choice of three compounds per race, not two.

Pirelli also wants to re-introduce the so-called "cliff", a point in the tyre's life where its performance drops off dramatically, to spice up the racing.

Beyond that, Pirelli has made more on-track testing a pre-requisite of its continuation in F1 in 2017, when the sport is planning a rule revamp that will make the cars five seconds a lap faster - with wider tyres, wider track and bodywork, and revised aerodynamics.

This will increase aerodynamic loads by as much as 50% and will have a major impact on the tyres. So much so that Mercedes have recently suggested F1 should reconsider these plans.

Hembery says: "There is a lot of debate between the teams as to what they are trying to achieve - do they need to change the aero so dramatically? Can they achieve it just with wider track and tyres and natural development?"

As for debate about the philosophy F1 should take with regard to tyres, Pirelli is open to exploring different avenues.

"Maybe for '17 we do a couple of compounds that mean drivers can push on, maybe we mix them up, maybe we have some races where you have degradation," Hembery says. "Try it out, see what gives the best racing.

"At the end of the day, we can do whatever they want. We're not defending one position or another.

"All we ask is they all agree what they want and once they have there is no point bitching about it afterwards."